What exactly is a bear?

A carnivore turned vegetarian by choice, strong by nature, vulnerable by necessity

READING TIME 7 MIN
What's a bear
Where bears live
The social bear
People and bears
What's a bear
The physical makeup of a bear
The long road of bears
A bear’s diet
The omnivorous bear
A special berry
The carnivorous bear
The miracle of hibernation
Where bears live
The bears’ Apennines
A home for the bear
Beyond the bear
The social bear
Love and courtship
A cub’s life
The social map of bears
Competition, antagonism and play
People and bears
The state of the bear in the Apennines
Research and bears
Why preserve bears
Emergencies and opportunities
The bear in the imagination
The native bear

Bears have many qualities that make them, evolutionarily speaking, the strongest and most intelligent of the large carnivores, but at the same time they are also the least resilient.

To really understand what a brown bear is all about, to paint a picture that reflects its habits and needs, you need to bear in mind the concept of resilience, namely the ability of an individual, a community or an ecosystem to adapt to a disturbance without suffering damage.

And in fact, the bears’ strength is also the root of their vulnerability.

On a summer’s afternoon, an Apennine bear searching for ants moves through the grass of a high mountain meadow.

Since they feed mainly on plants and given their size, bears would be unable to survive a long winter without a “stratagem”

Bears are omnivorous. They can feed on an astonishing variety of animal and plant foods, aided by a perfect physique for climbing, digging and catching prey. And in fact, the real strong point of these animals is their flexible diet, able to adapt to whatever the environment offers as the seasons go by. But there are contraindications. For example, the digestive system of bears is unable to absorb all the nutrients contained in herbaceous plants. They also need very nutritious, energy-rich foods to support their large body mass, but sometimes this comes in the size of a berry or an ant. Their flexibility is therefore limited by the constant need to find great quantities of highly nutritious foods. 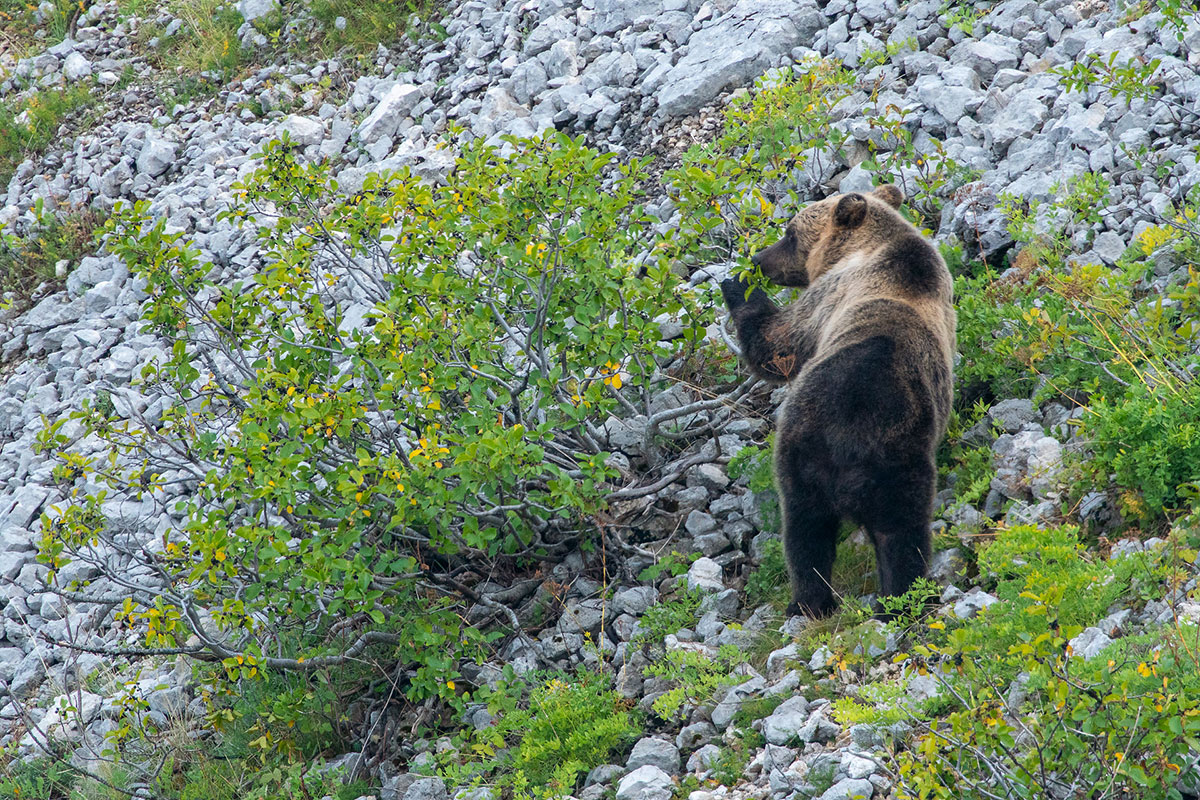 A large bear feeds on alpine buckthorn berries. The small fruits of this plant ripen in summer and are a very important food resource for the Apennine bear.

So they spend the winter months sheltering in a den in a state of dormancy, not eating, drinking, defecating or urinating and slowing their metabolism down drastically. In order to survive such a long fast (up to six months), they must be obese when winter comes. The accumulation of body fat and excess lean mass is critical, especially for the females who will give birth and nurse their young in the den. During this time, bears are therefore very vulnerable and any event that makes them leave their winter shelter or disturbs them while they sleep can jeopardise their survival and even cause the premature death of their cubs. Bears therefore need “special” places, far from sources of disturbance, where they can feed quietly and fatten up sufficiently, then even more “special” places to hibernate and raise their young. 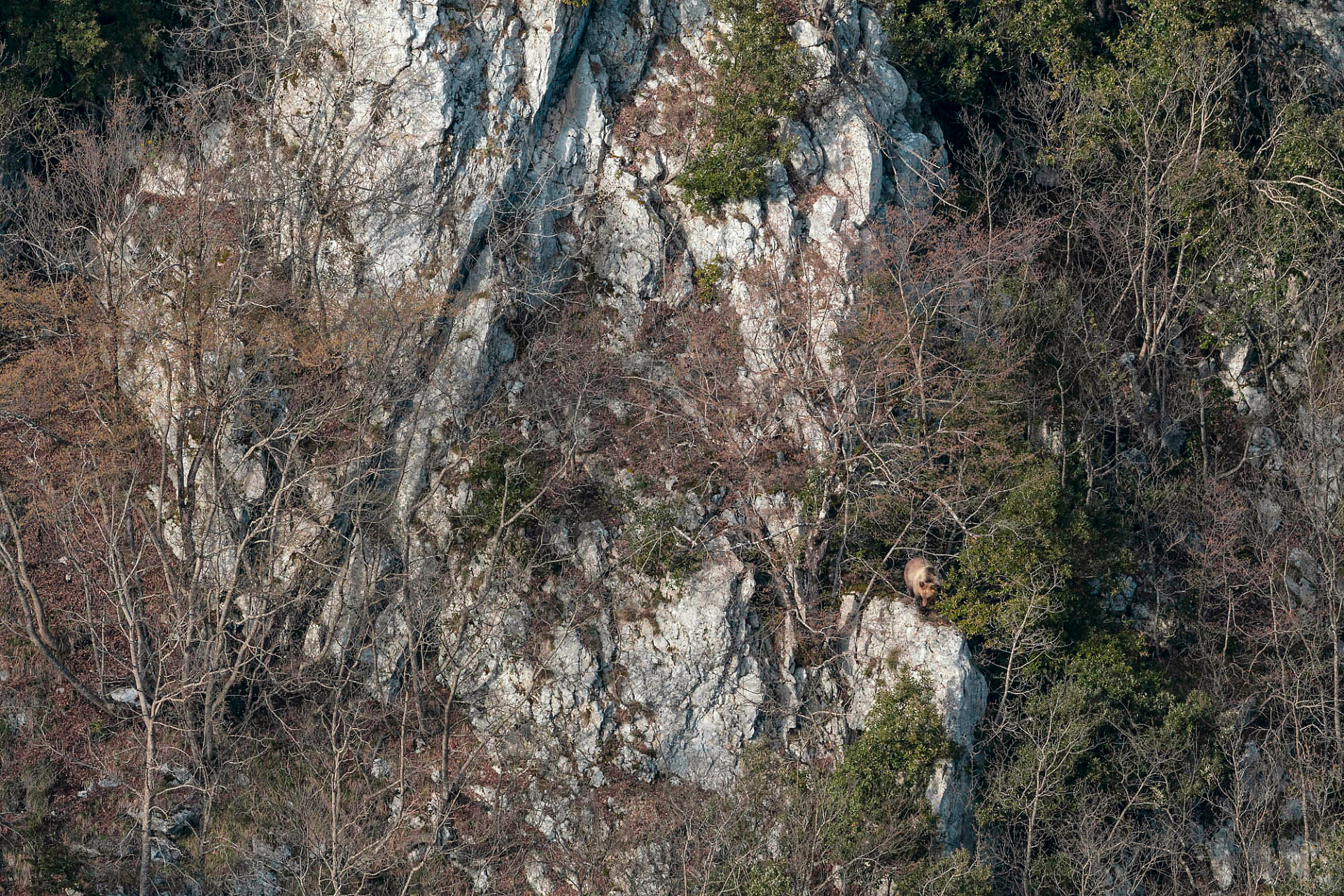 In late winter, an adult bear moves along a rocky slope near its hibernation den. These are very sensitive areas, so the photograph was taken from a great distance to avoid disturbing the animal.

To survive, bears need vast territories (we’re talking about hundreds or even thousands of square kilometres for a single individual) with highly diversified environments where they can find food, water and shelter. Of course, the more space an animal occupies, the greater the chances of encountering humans or their infrastructure, with all the risks and conflicts this entails. Furthermore, once they have chosen a territory, bears, particularly females, find it hard to move away and remain closely attached to their maternal territory. Known as philopatry, this attachment limits their alternatives and makes them very vulnerable. Female bears are extremely long-lived, reaching up to twenty years or more, but they breed very slowly. A bear may be up to eight or ten years old before giving birth for the first time. The cubs are born only every three or four years. A litter usually consists of no more than three and less than half survive the first year of life. So a female will rarely manage to breed more than three or four times in her lifetime. This means that bear populations have great difficulty in sustaining high levels of mortality, especially when adult females are involved. 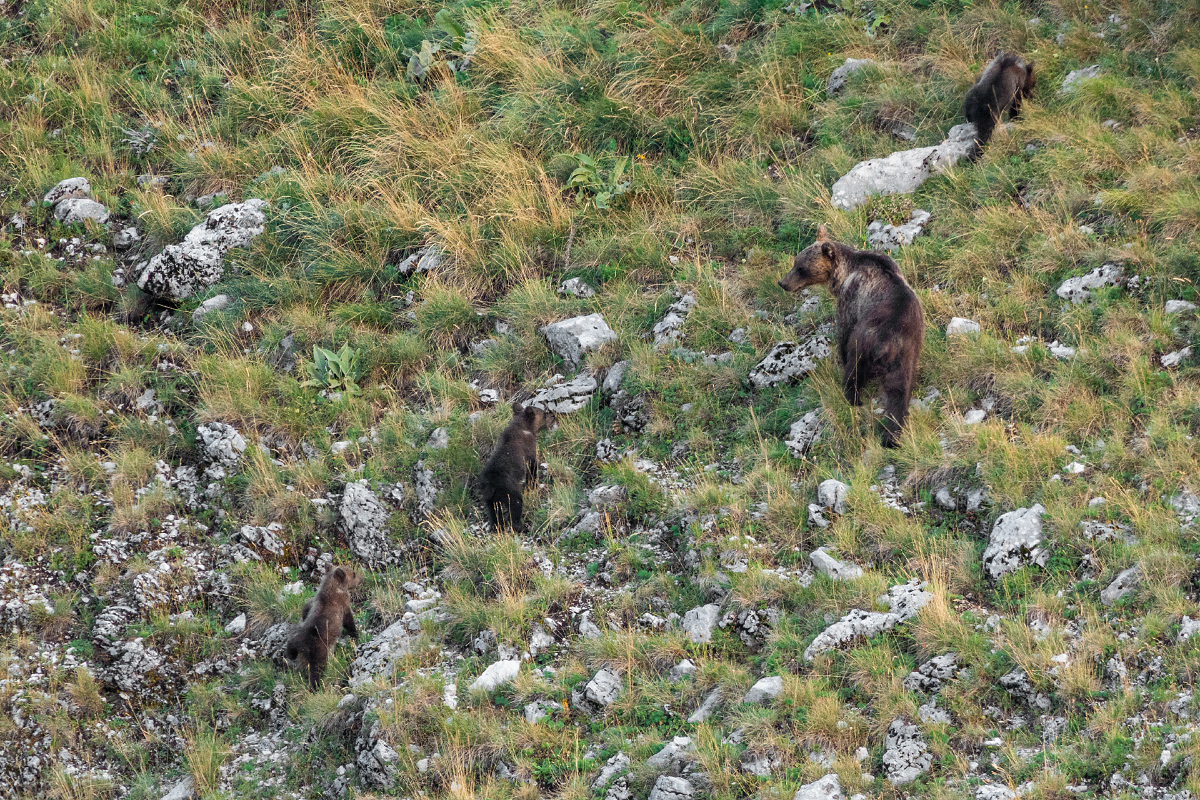 At dawn in the high mountains, a female bear is on the move with her three cubs. Females seek out quiet places to raise their offspring and remain particularly attached to their home territory.

The limitations associated with a high-energy diet, a long turnover period between generations and the strong philopatry of the females mean that bears are not well adapted for living in human-dominated environments. And this is confirmed by history. In prehistoric times, the brown bear was found throughout the European continent, with the exception of islands such as Ireland, Corsica and Sardinia. The growth of the human population was accompanied by extensive deforestation and transformation of the land for farming, altering, reducing and fragmenting the area occupied by bears. But that’s not all. Over the centuries, bears have also suffered heavy direct persecution. There are currently an estimated 18,000 bears in Europe. A total of ten distinct populations have been identified, including four isolated populations numbering less than 100 individuals (Alps, Central Apennines, Eastern Cantabrians and Pyrenees). The highest densities have been observed in the Carpathians and the lowest in the Scandinavian countries.

Today there are two bear populations in Italy, one in the Apennines and one in the Alps. The difficult relationship between bears and man in the Alps led to their total eradication in the 1990s. Following a reintroduction project initiated in 1990 with the release of ten bears from Slovenia, the bear has now returned to the Alps with a population of about 60. In the Apennines, however, the bear has never been extinct, although its distribution and numbers have reduced drastically, especially over the last centuries. The present population is estimated at around 50 individuals over a main distribution area of about 1800 km2, but they are also present occasionally or in expansion over an area of about 5000 km2.

The brown bear (Ursus arctos) is a species of European interest and from a regulatory point of view is included: 1) in the Bern Convention, ratified by Italy with Law no. 503/81, as a strictly protected fauna species (Appendix II); 2) in the Washington Convention on International Trade in Endangered Species of Wild Fauna and Flora (CITES regulation), made executive in Italy with Law no. 150/92 and modified by Law no. 59/93, integrated by legislative decree no. 275/01, as a species whose trade is regulated in order to avoid utilisation incompatible with its survival (Appendix II); 3) in the Habitats Directive 92/43/EEC (implemented in Italy by Presidential Decree no. 357 of 8 September 1997, modified and integrated by Presidential Decree no. 120 of 12 March 2003) as a species of European interest requiring strict protection (Annex IV). Italian Law no. 157 of 11 February 1992 also includes the brown bear among particularly protected species (art. 2, para. 1). As far as Italy is concerned, implementation of all protection, management and monitoring measures to ensure conservation of the Alpine and Apennine brown bear populations is thus the responsibility of the State and Regional Authorities. The conservation status of plants and wildlife is assessed at national and international level by the guidelines of the IUCN (International Union for Conservation of Nature), a non-governmental organisation that evaluates the risk of extinction of a species. All categories defined as Vulnerable (VU), Endangered (EN) and Critically Endangered (CR) are conservation priorities as their extinction is a real prospect unless the threats are reduced. Sixty percent of European brown bear populations are at risk, including those in Italy. There are two distinct action plans for bears in Italy, both drawn up through the involvement of several local bodies, in addition to the MATTM and ISPRA: the PATOM for the Marsican brown bear and the PACOBACE for the bear in the central Alps. The Abruzzo Region has identified the conservation of the Marsican brown bear as a priority and supports various conservation initiatives (L.R. 9 Giugno 2016 n.15).