READING TIME 10 MIN
What's a bear
Where bears live
The social bear
People and bears
What's a bear
The physical makeup of a bear
The long road of bears
A bear’s diet
The omnivorous bear
The carnivorous bear
A special berry
The bear and the ant
The tree of plenty
The miracle of hibernation
Where bears live
The bears’ Apennines
A home for the bear
Beyond the bear
The social bear
Love and courtship
A cub’s life
The social map of bears
Competition, antagonism and play
People and bears
The status of bears in the Apennines
Looking for bears
Why conserve bears
Emergencies and opportunities
A bear-friendly community, a love-hate relationship
Bears and roads
Bears avoid humans when they can
The Apennine bear
The bear in the imagination
The native bear

In order to live, brown bears need to move freely across vast spaces, find undisturbed areas to rest and have access to a wide variety of food resources depending on the season.

The Central Apennines is one of the few remaining areas in Italy still able to offer bears everything they need. The region’s rugged limestone mountains furrowed by long, deep valleys and above all the vast areas of woodland, mainly beech forests, have allowed bears to escape extinction and survive to the present day. The naturalness and richness of the environments safeguarded within the borders of the protected areas in the Apennines (such as the Abruzzo, Lazio and Molise National Park) are now famous and synonymous with unspoilt, wild nature, including at international level. But don’t be fooled by the apparent wildness of these places. With the exception of a very few areas, the wilderness is, so to speak, largely “secondary”, in other words, the high degree of naturalness was only reinstated during the last 50-60 years. The conservation measures introduced certainly contributed, but it was mainly a consequence of profound socio-economic changes in the region and abandonment of the traditional exploitation practised in these mountains for centuries.

On a spring afternoon an Apennine brown bear wanders around an old ruined farmhouse. A large part of its range is now represented by secondary natural habitats originated from the abandonment of traditional land use activities.

The first traces of human habitation in the Central Apennines date back 500,000 years, well before the presence of Homo sapiens in Italy, datable to around 40,000 years ago.

But it was not until 7-8,000 years ago during the Neolithic that the first substantial changes in the environment began, largely coinciding with the advent of sheep farming and agriculture. After tens of thousands of years spent practising almost exclusively mainly itinerant hunting, fishing and gathering the wild products of the earth, for the first time, our ancestors entered in some ways into “competition” with wild nature and its bulkiest inhabitants. In order to create pastures for their flocks and fields to cultivate, Neolithic people used fire and the axe to clear ever greater space in the dense primeval vegetation. The ridges and slopes of the mountains and valley floors were thus almost permanently deforested, creating the vast, barren secondary grasslands so typical of the Apennine landscape. At the same time, central Italy saw the arrival of new domesticated animals and the first varieties of cultivable plants. In order to defend these, man had to deal with the large predators and herbivores present in the region. The advent of a more sedentary lifestyle and emergence of the first settlements brought new roads and infrastructure, later extended, improved and organised first during the Italic period, then in particular under the Romans. During this period of history, the human population grew considerably and the first important urban centres were established, including in the innermost areas. In the first centuries A.D., the Central Apennines from the hinterland to the coast were crossed by a complex road network and parcelled out and rigorously organised by the emissaries of the Roman government. All this, of course, at the expense of wooded and wild areas, in other words, the areas most suitable for the survival of large animals. 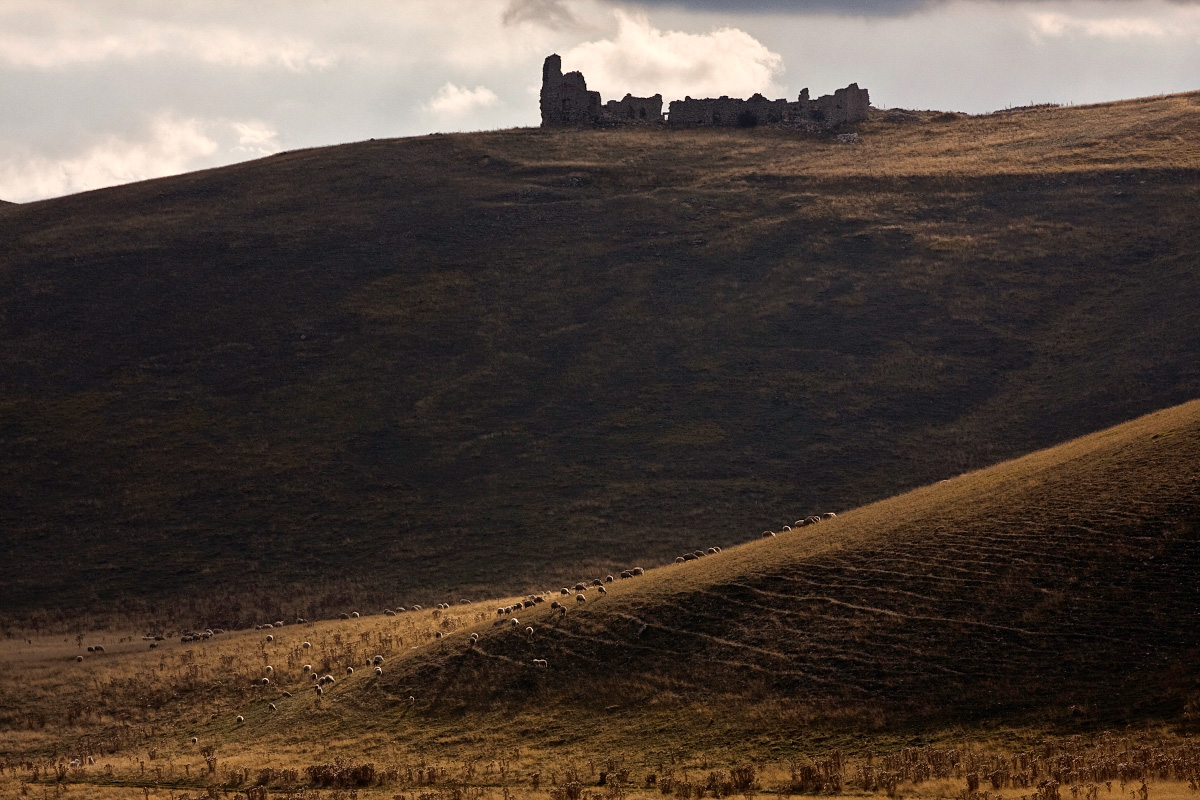 A flock of sheep grazes in the shade of the remains of the Grancia di Santa Maria del Monte in the Gran Sasso Massif. Founded by Cistercian monks in the 13th century, this high-altitude monastery remained in use until the end of the 16th century, when decreasing winter temperatures due to the Little Ice Age forced the monks to abandon it.

This particularly prosperous era for our ancestors was, however, destined to be short-lived. The Middle Ages, in fact, brought what was in some ways a step backwards. After the collapse of the Roman Empire and with the arrival in the peninsula of peoples of central European origin, bringing with them a culture and economy more focused on utilisation of the forest, many cultivated areas were abandoned and the woods and forests made a potent comeback throughout the Apennines. While wars, epidemics and famine decimated the population, in an increasingly less populated land, the colonisers went back to extensive hunting and semi-wild animal husbandry, bringing with them particular forestry methods. 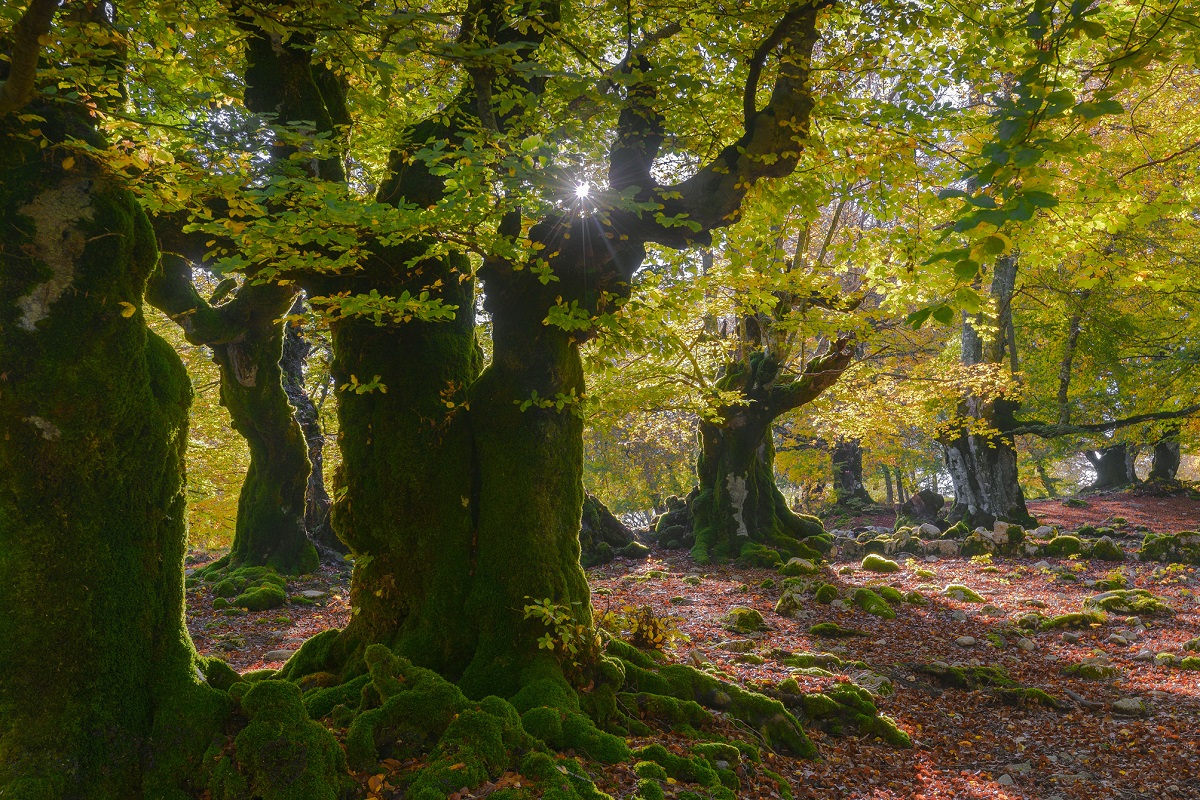 A Molise shepherd leads his flock during the autumn transhumance along one of the last remaining sheep tracks. Today, very little remains of a practice that once saw millions of sheep driven each year to winter in the Tavoliere delle Puglie.

Particularly significant among these was the “difesa” system of management, a method that has left numerous examples in the region (such as the beautiful Difesa di Pescasseroli and Difesa di Opi in the upper Sangro valley, or the Bosco di Sant’Antonio in the Maiella area). Usually located near a village, a “difesa” was a characteristic tree-dotted pasture for communal use, where cattle were left to graze among ancient trees, beech, oak and fruit trees in particular. These sizeable trees were pruned and pollarded repeatedly to produce more branches and thus more foliage and fruits to feed the domestic animals, particularly at the end of summer. Although of artificial origin, “difesa” beech forests today represent structurally very varied environments and important habitats for numerous species, from those seeking refuge in the hollow of old trunks to those only able to live under a partially open forest canopy. They are therefore essential to the conservation of Apennine biodiversity, including of course bears, which frequent them at many times of the year, especially in years of abundant beechnut production.

In this interview, Aurelio Manzi, ethnobotanist and scholar of the Central Apennines, illustrates the most salient moments in the history of the landscape of this region and how this is linked to the vicissituded of the Apennine bears.

At the end of the Middle Ages, an increasingly marked decrease in temperature throughout the Northern Hemisphere initiated the so-called Little Ice Age. With a particularly harsh climate, this period lasted until the 19th century and had a great influence on the distribution of humans and their activities in the Apennines. The cold temperatures and very long winters led to a strong and widespread demand for suitable clothing and coverings in general. Wool thus became one of the most important products at the centre of the economy and the trigger for the great epic of transhumance. It was during these centuries that the sheep farming industry in the region was at its most prosperous, with hundreds of thousands of sheep being driven annually along the ancient drove trails from the green mountain pastures of the Apennines to the wintering areas along the coasts and plains of northern Puglia in particular. While on one hand, for some families (albeit just a few), the prosperous economy based on sheep farming allowed the culture and economy to flourish again after centuries of uncertainty and poverty, on the other, there was once more a heavy impact on the natural environment and the forests declined again, together with the species depending on them. This was the period of maximum conflict between farmers and large wild predators. 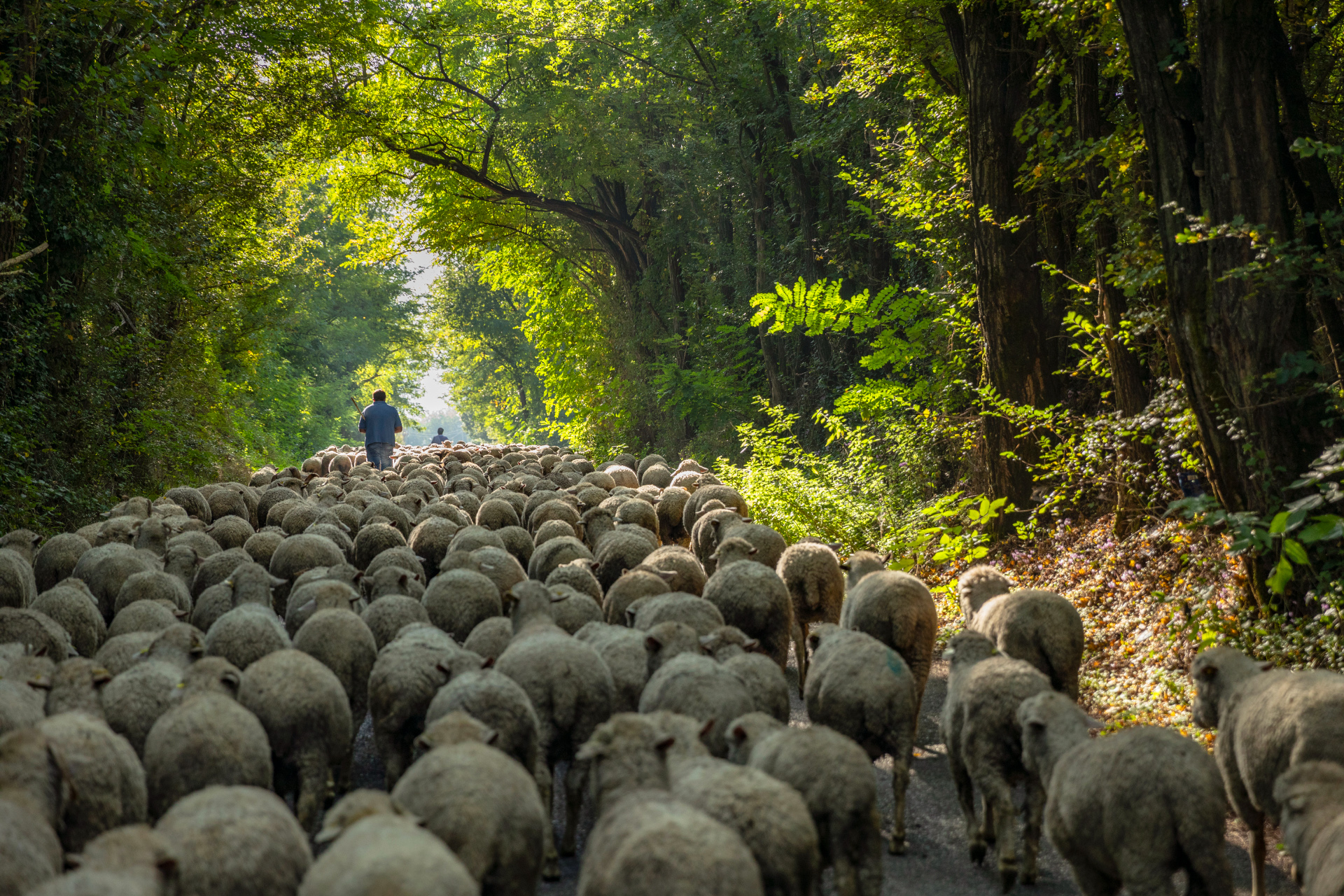 A Molise shepherd leads his flock during the autumn transhumance along one of the last remaining sheep tracks. Today, very little remains of a practice that once saw millions of sheep driven each year to winter in the Tavoliere delle Puglie.

As the temperatures began to rise again at the beginning of the 19th century, the abolition of feudalism in the Kingdom of Naples and relative establishment of private property with the seditious laws promulgated by Napoleon’s brother King Joseph Bonaparte triggered a new colonisation of the mountains and a further penetration of man, reaching even the wildest areas of the hinterland. During these decades, forests were again extensively cleared, large animals (previously the property of the aristocracy) were hunted and land was cultivated even at high altitudes. The poverty of a large part of the population in regions such as Abruzzo and Molise drove entire families to live in the mountains, using caves or simple huts as dwellings and “claiming” land from the mountains, in other words, cultivating small plots of land on the better exposed mountainsides, sometimes after removing stones and rocks and terracing the slopes. The huge piles of stones and tholos huts often found in the Apennine pastures date from this period, silent witnesses to the labours and hopes of those generations. 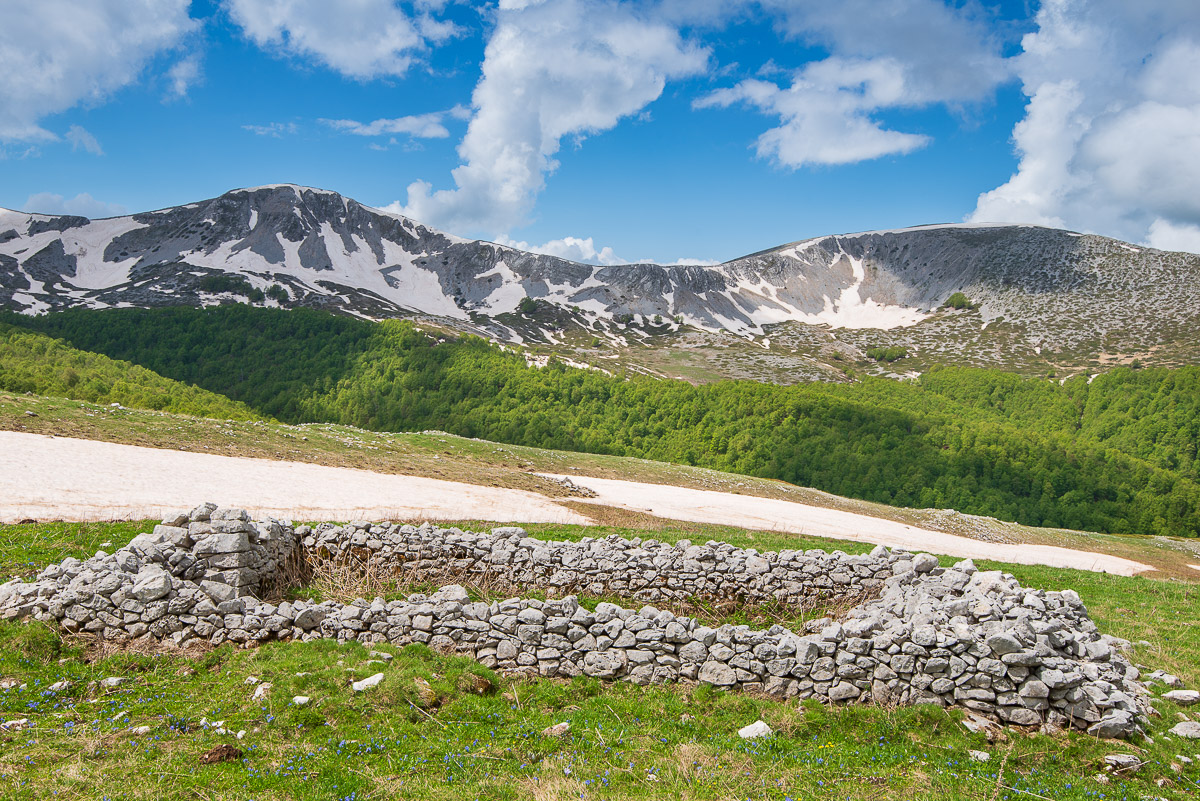 The remains of an abandoned “stazzo” (sheep corral) in the heart of the Abruzzi Apennines. Everywhere in the region there is evidence of the exploitation of the mountainous areas following the enactment of the laws on feudal eversion.

Exploitation of the territory and destruction of the natural environments and fauna of the Central Apennines continued inexorably until after the Second World War and the middle of the last century. With the exception of the fortunate and extraordinary case of the Monti della Marsica and upper Val di Sangro (transformed in 1922 from a hunting reserve to a protected area, the first nucleus of the Abruzzo National Park which would later expand to also reach the surrounding regions), most of the Apennines had to wait for the massive exodus from the countryside to the towns and cities and the end of the traditional rural economy before the woods returned to the slopes and were again colonised by large animals. The region’s exceptional naturalness and wealth of biodiversity today is due precisely to this process (known as “rewilding”), together with protection of certain species, especially carnivores, projects for the reintroduction of extinct species and, of course, establishment of the many protected areas in the Apennines (including the Gran Sasso – Monti della Laga and Maiella National Parks, the Sirente – Velino Regional Park and the regional reserves). 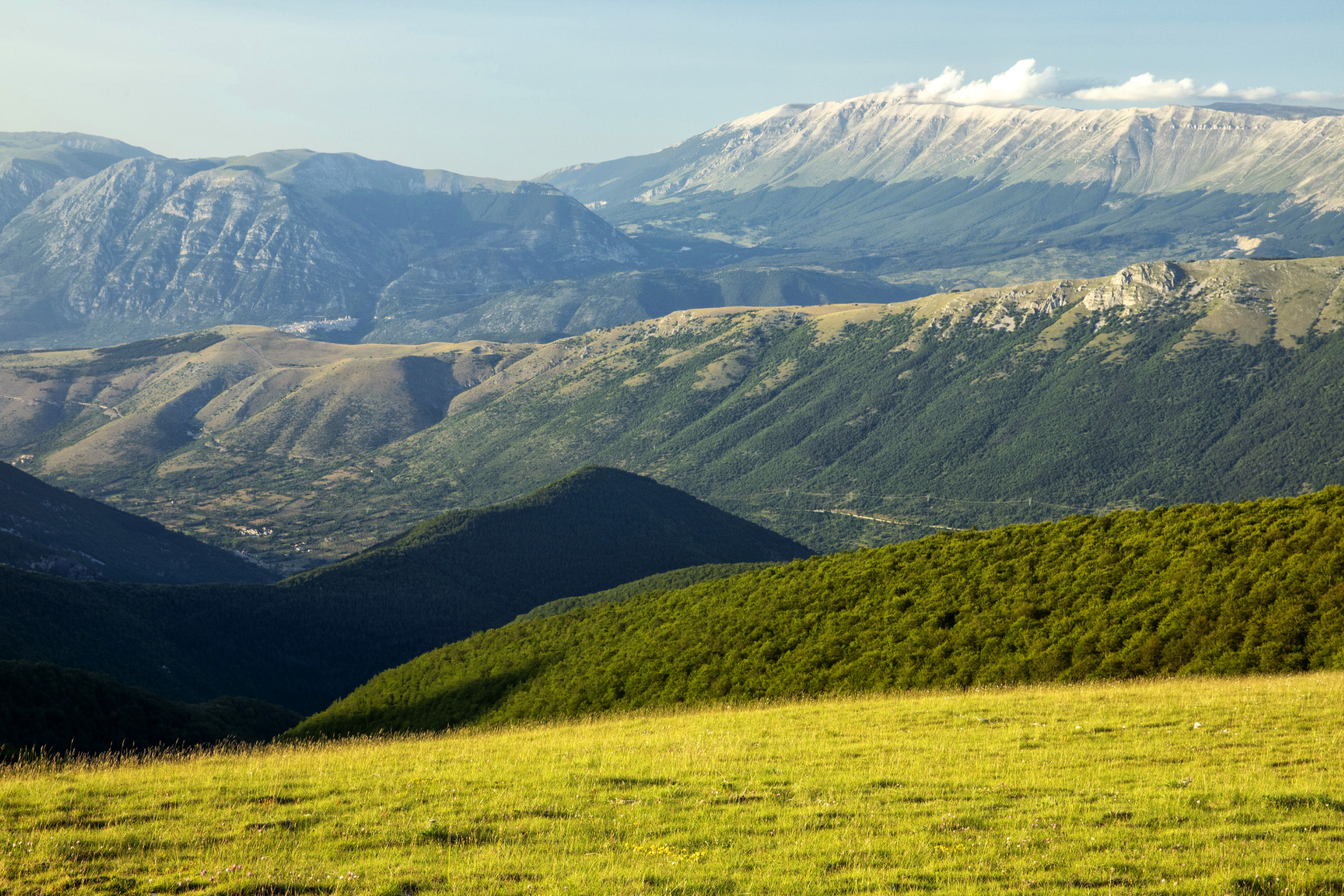 Green mountain ridges succeed from the Monte Genzana Regional Reserve to the heart of the Maiella National Park. The continuity of the protected areas of the Apennines and the efficiency of the so-called ecological corridors between the environments are the prerequisites for the expansion of the small Marsican bear population.

The complex and stratified historical vicissitudes of central Italy, combined with the territorial peculiarities of the Apennine hinterland, have laid the foundations for the creation of a rich and varied landscape. An environmental mosaic created by man and recently claimed back by nature, offering a great variety of environments and food resources to support the life of many species, a protective belt for the last, precious wildernesses of the high mountains, deep valleys and most intact forests.

It is up to us to preserve and manage it so as to avoid excessive environmental uniformity and ensure its productivity. Because it is precisely this mix of nature and culture that provides the exceptional setting for the wonderful story of Apennine bears.