The physical makeup of a bear

Bears have the “physique” to climb, dig, gather, catch prey and court

READING TIME 11 MIN
What's a bear
Where bears live
The social bear
People and bears
What's a bear
The physical makeup of a bear
The long road of bears
A bear’s diet
The omnivorous bear
The carnivorous bear
The miracle of hibernation
Where bears live
Bears and the Apennines
A home for the bear
Beyond the bear
The social bear
Love and courtship
A cub’s life
The social map of bears
Competition, antagonism and play
People and bears
The state of the bear in the Apennines
Research and bears
Why preserve bears
Emergencies and opportunities
The bear in the imagination
The native bear

A bear typically advances with a swinging gait and ambling pace, moving both limbs on the same side almost simultaneously.

With their massive build, these animals usually move at a slow pace. Their weight is greatly influenced by age and the season. They reach maximum weight in autumn, when they continue accumulating excess body fat until they become practically obese. Carrying this amount of weight greatly limits their speed of movement and modifies their posture, but it allows the bears to survive in a state of dormancy known as hibernation for up to six months without eating or drinking.

The anatomy of the brown bear enables it to perform a variety of actions, combining strength with delicacy.

Bears are among the largest land carnivores and at birth a cub may weigh 500 times less than its mother.

An adult Apennine male weighs an average of about 144 kg (between 66 and 205 kg), while females are lighter, with an average weight of 93 kg (68-151 kg). Each year, the weight of a bear can increase by as much as 30-40 kg before hibernation. Males are a total of 133-181 cm long with a shoulder height of from 71-100 cm, while females measure 122-150 cm and 62-87 cm respectively. When standing upright on its hind legs, a bear can therefore reach as much as a couple of metres in height. Bears are among the mammals with the greatest weight difference between birth and adulthood. The cubs are born prematurely and are defined as altricial. When newly born, they are blind and hairless and weigh no more than 500 grams. The growth of bears is concentrated during the first five years of life, but they may also continue growing as adults, especially the males, as size is an important factor in competition for females. 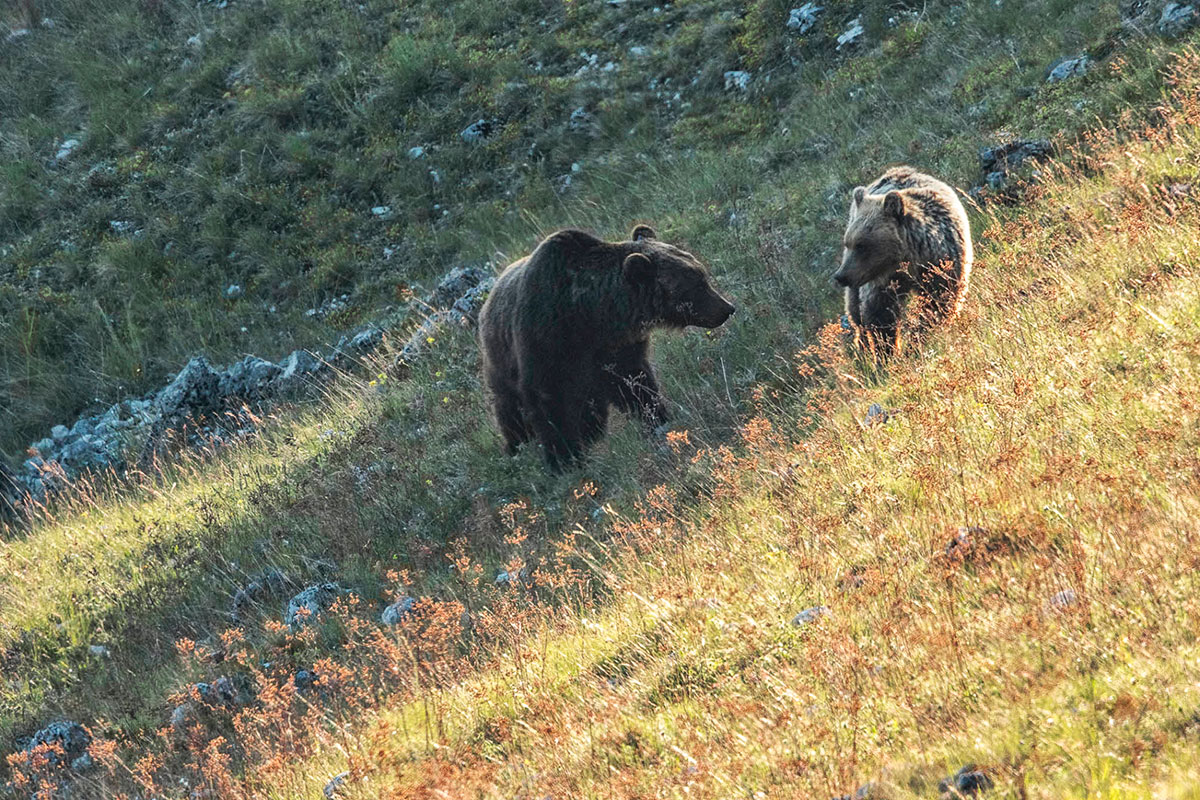 Male bears (left) are significantly larger than females (right). The former can reach a weight of 200 kg and a height of 180 cm, while the latter rarely reach 100 kg and 150 cm respectively.

The muscles and skeleton of the limbs have evolved over time to make bears the strongest and most agile of the land carnivores, but also the slowest.

The limbs of bears have adapted to withstand the load of their “excess” weight. The muscles are well developed along the entire length of the limb. Their shoulder blades have become stronger and “disproportionately” large compared with other carnivores to provide a strong anchor point for the mighty “oversized” shoulder muscles. But the other bones of the forelimb are also characteristic. The humerus is more robust and the radius is slightly curved, while the morphology of the olecranon process has adapted to support the bicep muscles more effectively. The elbow and wrist joints have become more mobile, enabling the feet in particular to assume both supine and prone positions. Most carnivores walk on the tips of their feet, but like man, bears place their weight on the soles of their feet, a plantigrade posture providing support and stability. As a result, bears generally amble rather than run, but when they do run they can reach speeds of as much as 45-50 km/h, although over very short distances. Their strong and specifically structured limbs also give bears many other “powers”. They can climb anywhere to eat or escape danger, dig for food, build a winter shelter and manipulate objects with dexterity.

Each foot has long, curved claws, ideal not only for digging and clasping objects, but also for wrestling with other bears.

A bear’s tracks are unmistakable for their size, shape and the presence of five claws. The palms of the front and back feet consist of a thick adipose membrane covered by a thickened epidermis. Known as the plantar cushion, this is kidney-shaped and extends transversely in the front foot and pyriform and longitudinal in the back foot. The front foot of an adult bear is 9-15 cm long and 9-14 cm wide, while the back foot measures 14-23 cm and 8-19 cm respectively. The five strong, curved, non-retractile claws can be as much as 10 cm long. Being a plantigrade enables bears to stand upright on two legs, a posture they assume when uncertain or curious.

A large male Apennine bear on alert stands up on its hind legs. Pass the mouse over the image to show the powerful muscles of the pectorals and forelimbs, as well as their skeletal structure, culminating in claws up to 10 centimetres long. (Illustration © Lorenzo Peter Castelletto)

Over time, the structure of the teeth and skull have undergone modifications to adapt them perfectly to an omnivorous diet.

Bears have 36-42 teeth and complete their dentition at an age of about 15 months. The vestigial premolars are often deciduous, few in number, small, or even missing altogether in some individuals. Bears use their incisors and canines to seize and cut and molars to grind and crush. Their dentition has several characteristic features, including the presence of a diastema (toothless space behind the canines), also found in herbivores and ideal for tearing grass. A bear’s molars have a long, large surface and are particularly flat with a tubular appearance (bunodont teeth), ideal for grinding various kinds of food.

Comparison of Apennine bear, wolf and chamois jawbones (not to scale). The characteristics of the teeth of an omnivorous animal like the bear are midway between those of a herbivore and a pure carnivore.

Marsican bears have a unique skull, shorter, wider, taller and with a much shorter rostrum than any other European brown bear. It is characterised by the expansion of the two supraorbital apophyses and greater distance between the two zygomatic arches, with consequent enlargement of the facial profile. From an evolutionary point of view, experts believe the enlarged temporal fossa to be a consequence of the expansion of the masseter-pterygoid and temporal muscles used in mastication, making for a stronger bite. This modification would appear to be associated with a higher content of fibrous plant material and nuts in the bears’ diet. The modified shape of the first molar would seem to confirm this hypothesis. Variations in the shape of the teeth, zygomatic arch and temporal fossa have also been observed in the exclusively vegetarian panda. Considered together with the exclusive presence of certain digestive enzymes specifically for herbaceous plants, the Marsican bear is one of the most specialised brown bears for a vegetarian diet.

The zoologist Anna Loy explains the particular features of an Apennine bear skull that differentiate it from all other brown bears and emphasise its uniqueness.

Bears mostly “follow their nose” to find food and communicate, but short-range vision and hearing can also be a great help in making the right choices.

Smell plays an important role in the lives of bears. When a bear moves through its territory, it uses its sense of smell to locate all the thousands of smells it encounters, whether food, water, mates, competitors or dangers. Recent studies have shown that these animals are able to communicate with each other by releasing and laying odorous chemical “trails”. The bear’s sense of smell is over two thousand times better than that of man, although comparable with other carnivores. The area of the brain responsible for the sense of smell (known as the olfactory bulb) is at least five times larger than the same area in the human brain and much more innervated than in other carnivores. The nasal epithelium of bears has hundreds of times more receptors than that of man. Some studies conducted on polar bears have shown that bears use air currents, positioning themselves downwind to pinpoint dead animal carcasses as much as several kilometres away. But bears are also very adept at locating food underground, including rodents, bulbs or insects. 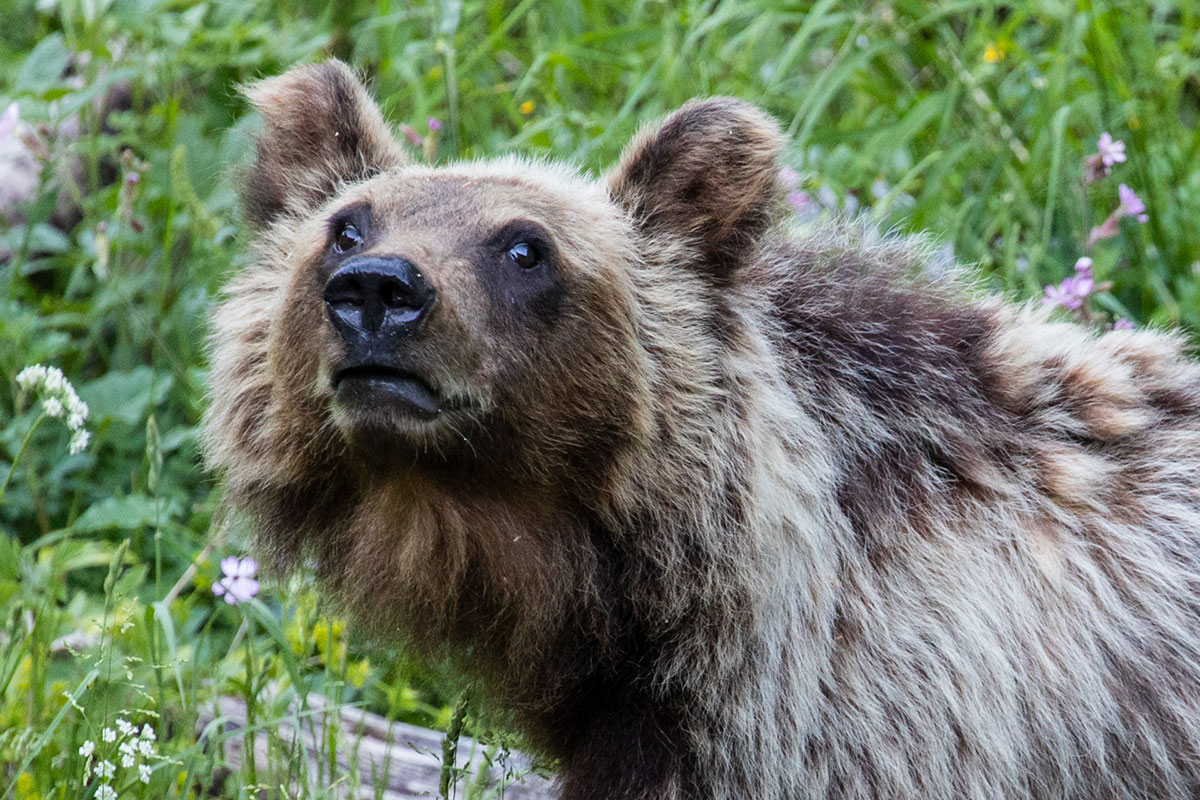 Close-up of a young bear on alert. In order to interpret the signals coming from outside, the animal utilises all its senses simultaneously, although the sense of smell prevails.

Bears have very small eyes compared to the size of their brains and are to all intents and purposes short-sighted. Sight is used by bears in coordination with smell, for example, to identify the most palatable parts of a specific plant. Bears communicate by vocalising with other bears, but also with other competitive carnivores. For example, some studies have shown that bears and lynxes compete for carcasses by vocalising, using their calls to signal their presence and reduce competition. But their hearing also allows bears to locate small prey underground, or find carcasses of wild ungulates by following the sound of hunters’ gunfire. This shows that although their hearing is less acute and well-developed than in other carnivores, it nevertheless plays an important role in the life of bears.

A bear’s whole life revolves around finding food. They must put on weight to hibernate and breed. So it is not surprising that their morphology has evolved to enhance their ability to find food and compete, or that they use mainly the sense of smell to “define” their ecological and social world.

Bears have remarkable cognitive abilities, such as solving problems or using tools, which some scientists believe may have evolved together with their ability to feed on anything.