Bears build relationships with everything around them

READING TIME12 MIN
What's a bear
Where bears live
The social bear
People and bears
What's a bear
The physical makeup of a bear
The long road of bears
A bear’s diet
The omnivorous bear
The carnivorous bear
A special berry
The bear and the ant
The tree of plenty
The miracle of hibernation
Where bears live
The bears’ Apennines
A home for the bear
Beyond the bear
The social bear
Love and courtship
A cub’s life
The social map of bears
Competition, antagonism and play
People and bears
The status of bears in the Apennines
Looking for bears
Why conserve bears
Emergencies and opportunities
A bear-friendly community, a love-hate relationship
Bears and roads
Bears avoid humans when they can
The Apennine bear
The bear in the imagination
The native bear

Every living organism is part of a whole. A plant, an animal and a rock are all interdependent.

The relationships may be innumerable, according to many experts, many more than we could ever imagine. Organisms compete with each other if they have too many things in common (e.g. food). Some kill to survive, the so-called predators; many organisms form intimate associations, genuine alliances or “symbioses” often benefiting both. Relationship after relationship, the lives of prey, predators, their associates and their environment intertwine in a unique and ever-changing dynamism eternally striving for balance. And that is how an ecosystem is born. You just need to pull one thread of this dense weave tighter to change the direction and intensity of the relationships, creating a sudden and unpredictable domino effect. If one of these threads breaks due to unnatural causes, the weave may unravel beyond hope of recovery. Every day, the lives of bears intertwine with those of other living (wolves, deer, squirrels, ants and plants) and non-living (rivers and soil) organisms, writing tales of nature that inspire wonder and a sense of belonging. 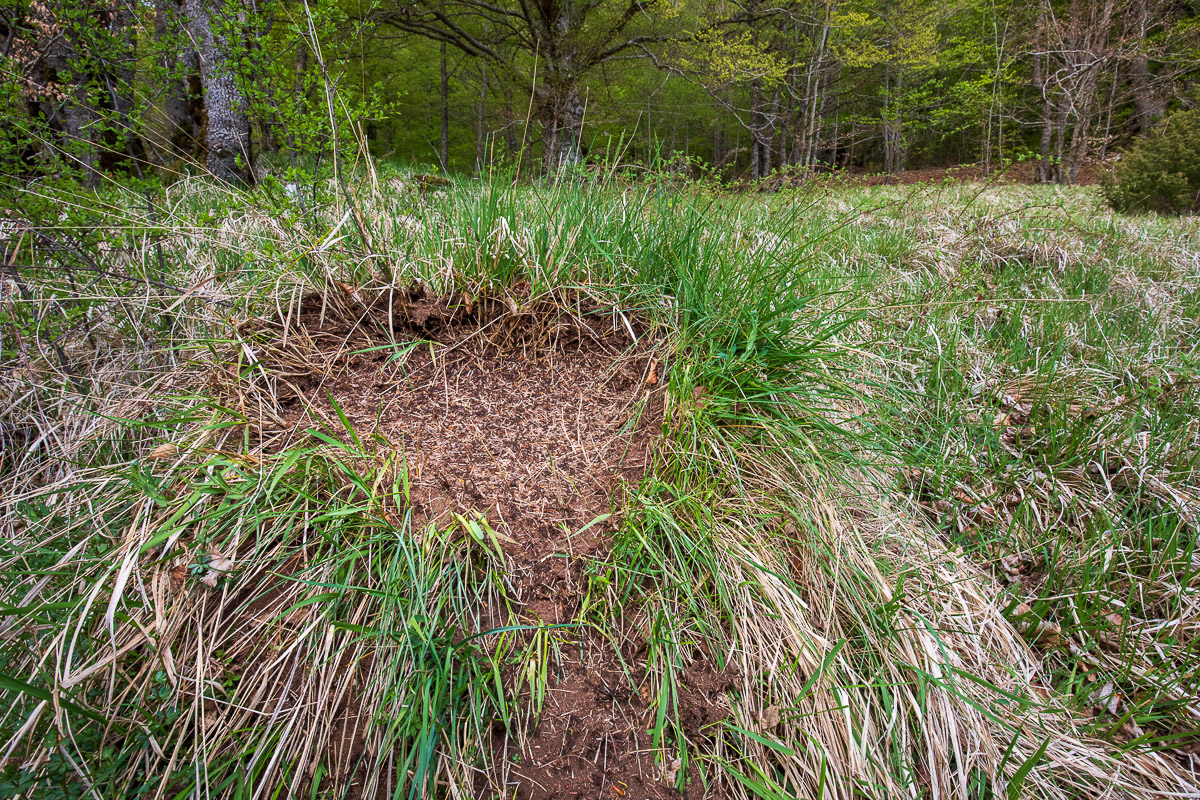 Ants are among the most cooperative organisms in the world, and not just among themselves. For example, they offer protection to bizarrely shaped insects belonging to the Membracidae family, which they “farm” in exchange for the molasses they defecate after feeding on plant sap. Similarly, by also hunting arthropods such as spiders, ants create a danger-free environment for many herbivorous insects (aphids, cicadas and beetles), which can then “graze” in peace. But in the land of bears, ants do not have an easy time of it. Bears are very fond of both adults and larvae and destroy their nests with their paws in order to eat them. Researchers in the USA have found that bushes of a plant in the Chrysothamnus genus (the same family as sunflowers) are much more luxuriant near damaged nests. How is that possible? Well, thanks to the bears, while the remaining ants are busy rebuilding their nests, many small predators such as spiders are gaining ground again and killing many species of herbivorous insects, allowing the plants to germinate and grow better.

Bears plant seeds like zealous farmers providing food for themselves and many other animals. 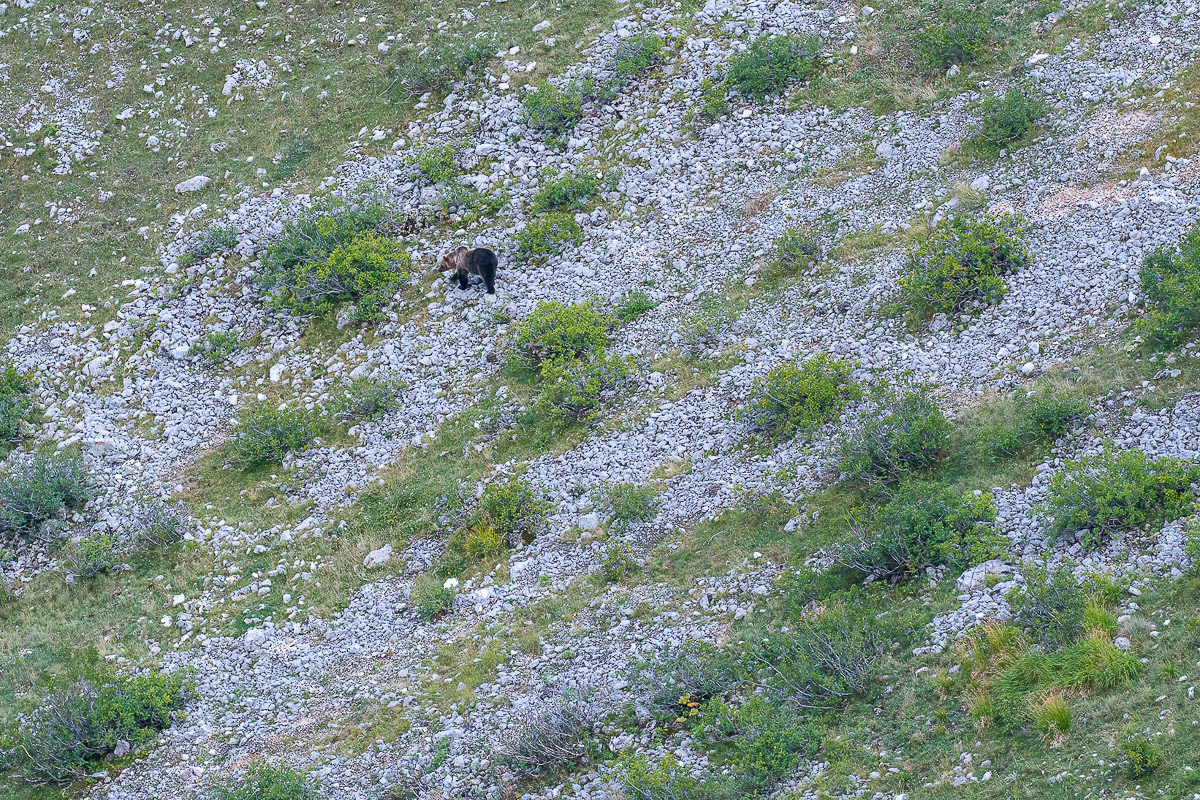 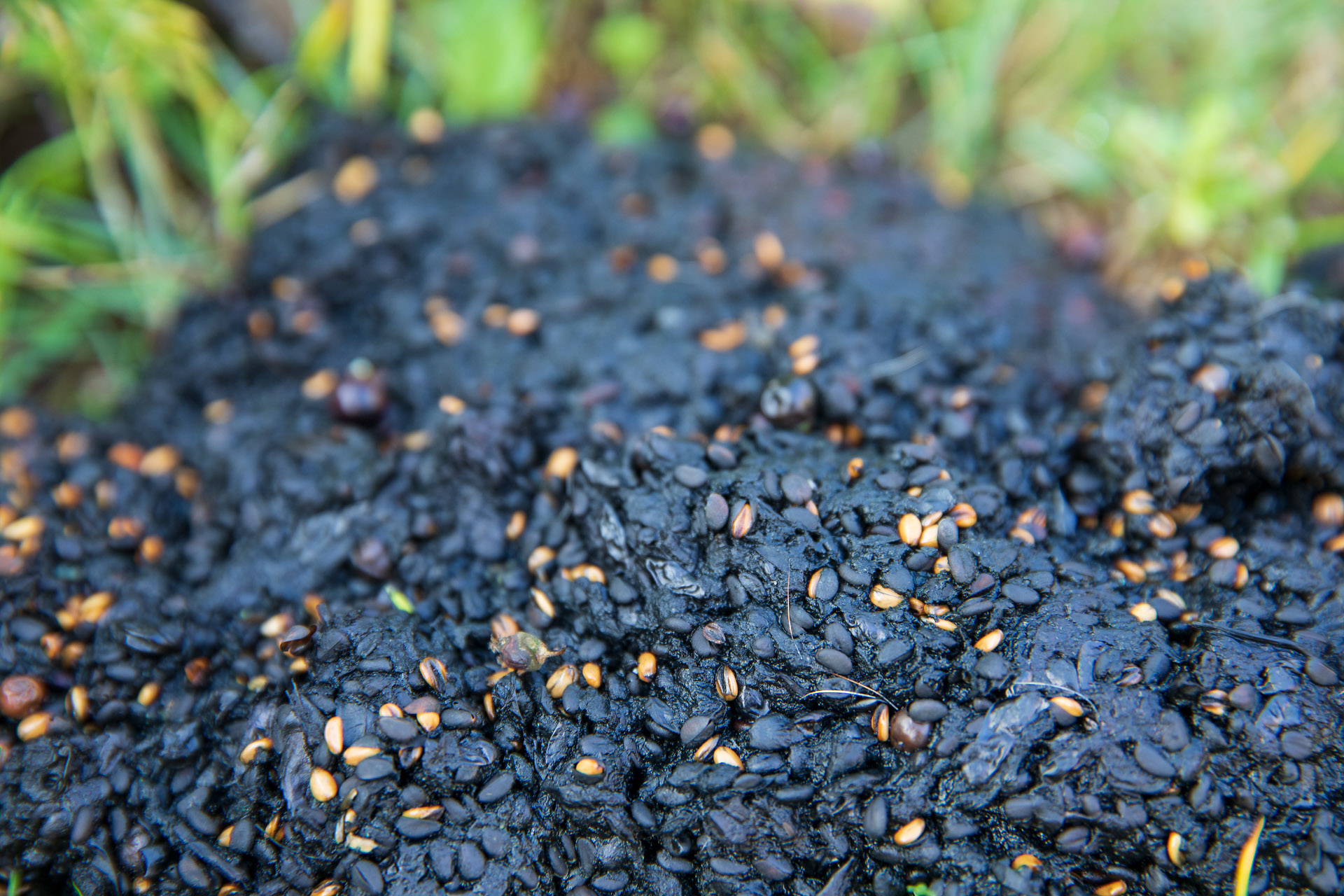 According to studies conducted along salmon rivers and streams in Alaska, brown and black bears can sow over 200,000 seeds of different berries in a single square kilometre. What’s more, a single bear may consume over 100,000 fruits in just one hour. But is it only bears that benefit? Experts say that’s not the case. Bears, first, followed by birds and small rodents, all contribute to disseminating the seeds of the fruits, facilitating the occupation of new territories and the search for more favourable environmental conditions, reducing competition between seedlings and the risk of cross-fertilisation. Bears are very effective at this, as they occupy territories as large as hundreds of square kilometres, cover distances of tens of kilometres while they are digesting and spread at least seven droppings a day. Research in Sweden has shown that seeds in bear droppings, stripped of their tegument during digestion, germinate one month earlier than those contained in fruit that just fell onto the ground. In addition, since bears defecate where they rest, the soil disturbance associated with the creation of a bed could help create the best conditions for seed germination. As bears also climb mountains every day, research has shown that transporting seeds to higher altitudes can help many fruit species, such as cherries, to combat climate change by migrating (or rather being transported) to cooler areas.

From May to September, Alaska’s streams and rivers come decidedly to life. Thousands of salmon swim up the rivers from the ocean coast to breed and lay their eggs. Bears are not indifferent to this incredible spectacle. From June onwards, dozens of bears congregate along the banks of the rivers to take advantage of all this fat and protein. In order to become obese as quickly as possible, bears also eat a lot of blueberries and berries of the Oplopanax genus, also known as devil’s club fruit. Using camera traps, researchers have discovered that mice and voles scavenge bear droppings. It’s not surprising… a single bear dropping may contain over 70,000 devil’s club seeds. In practice, a single excrement can meet the calorie needs of at least 90 mice. Considering the large number of bears that frequent the edges of streams and rivers during the summer, researchers have found that more than 50% of the rodents present only survive thanks to the bear droppings 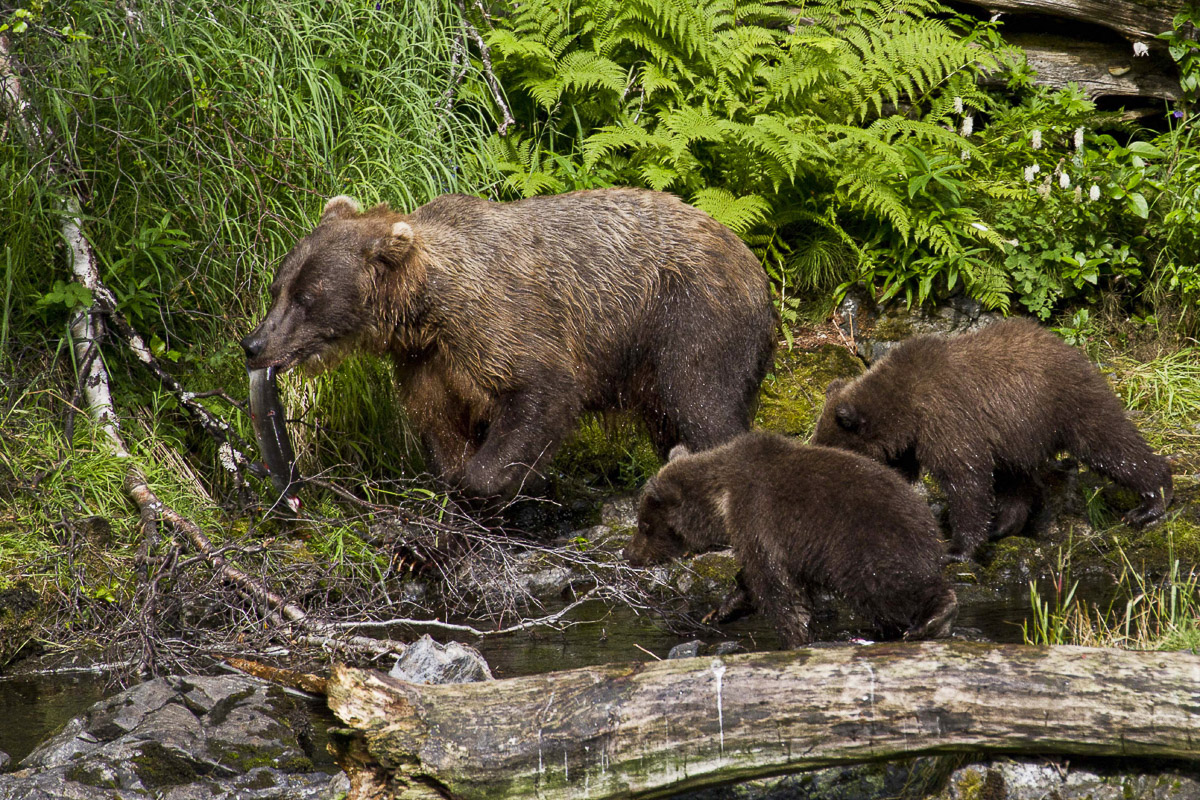 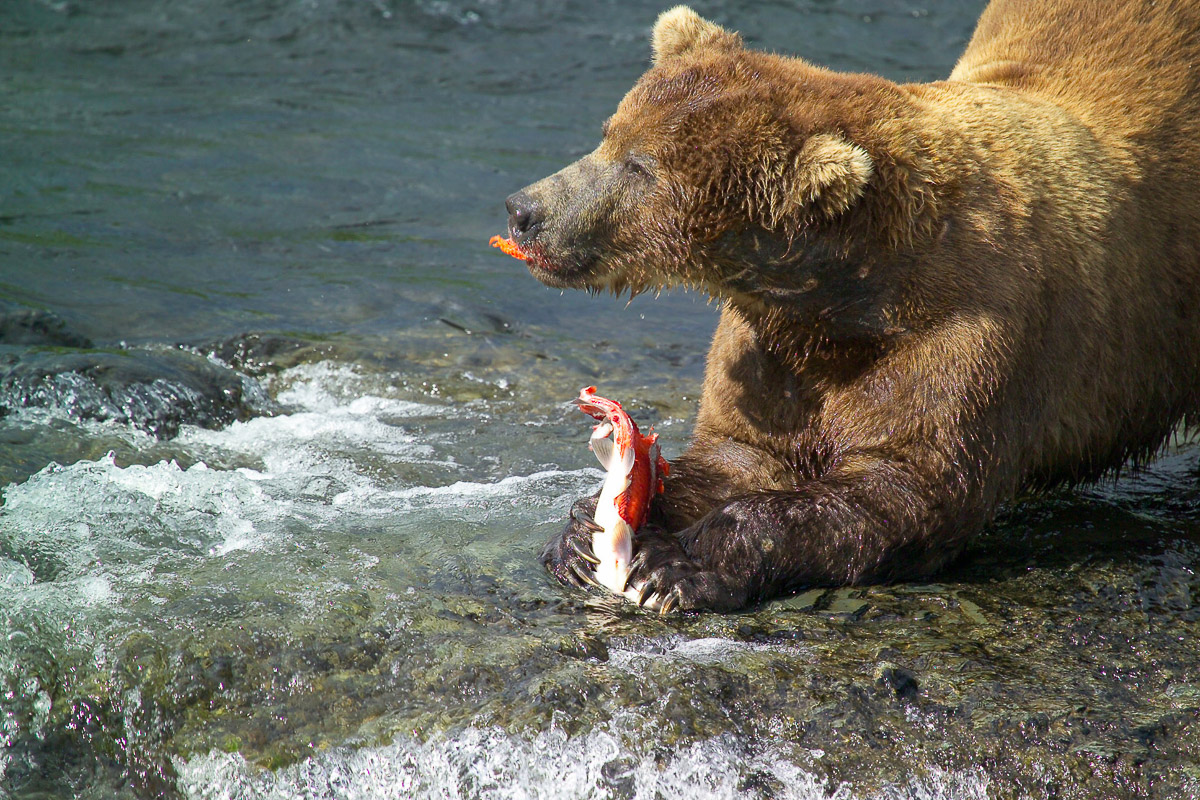 Stable isotope analysis of carbon and nitrogen has been used to study the flow of organic matter between the ocean and rivers in the boreal forests of North America. Nearly 26% of the nitrogen contained in the plants living along the river banks was found to be of marine origin. But how does nitrogen make its way up rivers against the current? In summer, bears in particular eat about 40% of the available salmon that swim up the rivers to spawn, distributing the marine nitrogen up to more than 500 metres from the river banks by leaving the remains of carcasses, defecating and urinating. For example, research has shown that more than 80% of the nitrogen of marine origin measured in silver fir leaves is transported by the bears themselves. Well-nourished riparian trees grow faster and denser, making them more attractive to deer and elk. They stabilise banks more efficiently, filter sediment, thus making the waters clearer, and create better shelter for growing fry. By providing food and nutrients, the bear and salmon team drive a genuine community that includes all links in the food web: scavengers, decomposers, herbivores and predators. Scientists say that the loss of either species would have serious environmental consequences for all organisms living in the same environment, from an alga or a bacterium to dozens of species of mammals and birds.

The wolf makes life easier for bears, even changing their habits

In 1995, wolves were reintroduced to Yellowstone National Park in America after an absence of more than sixty years. A research opportunity that experts were sure to exploit. What did the arrival of the wolves entail? Firstly, the wolves reduced the number of their favourite prey, the wapiti deer, and also influenced their feeding habits which changed as they needed to escape their new predators. In turn, there was an explosion in the growth of many berry-producing shrubs as there was less feeding pressure from the deer, increasing the availability of the berries and their consumption by grizzly bears. Not only shrubs, but also the riparian vegetation along many rivers became more lush, providing an ideal environment for many bird species and beavers, which increased in numbers. By building their dams on the rivers, the beavers created new ecological niches that favoured otters, fish, reptiles and amphibians. What’s more, with the return of the wolf, the availability of deer and elk carcasses also increased throughout the year, providing new food resources for crows, magpies, eagles, bears and coyotes, especially in the winter season. This is what is known as a trophic cascade. An ecosystem has changed and been enriched by the return of one of its links that had previously been eliminated at the hand of man.

Opportunity makes the bear thief, anything goes to become obese

Bears are very good at snatching prey from wolves and lynx, a behaviour known as kleptoparasitism. But researchers have found two more victims of the bears’ acts of piracy. These are two small rodents, each weighing no more than a few hundred grams. Between April and May in Yellowstone National Park, bears spend a lot of time digging their muzzles into the still partially snow-covered grasslands. This environment is home to a small rodent with subterranean habits, Thomomys talpoides, which feeds on plants and roots. These animals hide their food in elaborate tunnels, the entrances to which are visible on the ground in the form of mounds of earth. Although they also occasionally feed on a few individuals, bears plunder the reserves accumulated by these rodents, rich in roots of yampah and Claytonia virginica. But it is in autumn that the bear meets its second victim. In years when there is an abundance of pine nuts (Pinus albicaulis), rather than obtaining these seeds directly, more than 90% of the time the bears steal them from the underground stocks of red squirrels. In practice, the bears depend on a squirrel to exploit an energy-rich resource, essential for spending the winter fasting and breeding successfully.

Bears are environmental engineers, turning bark into food and shelter 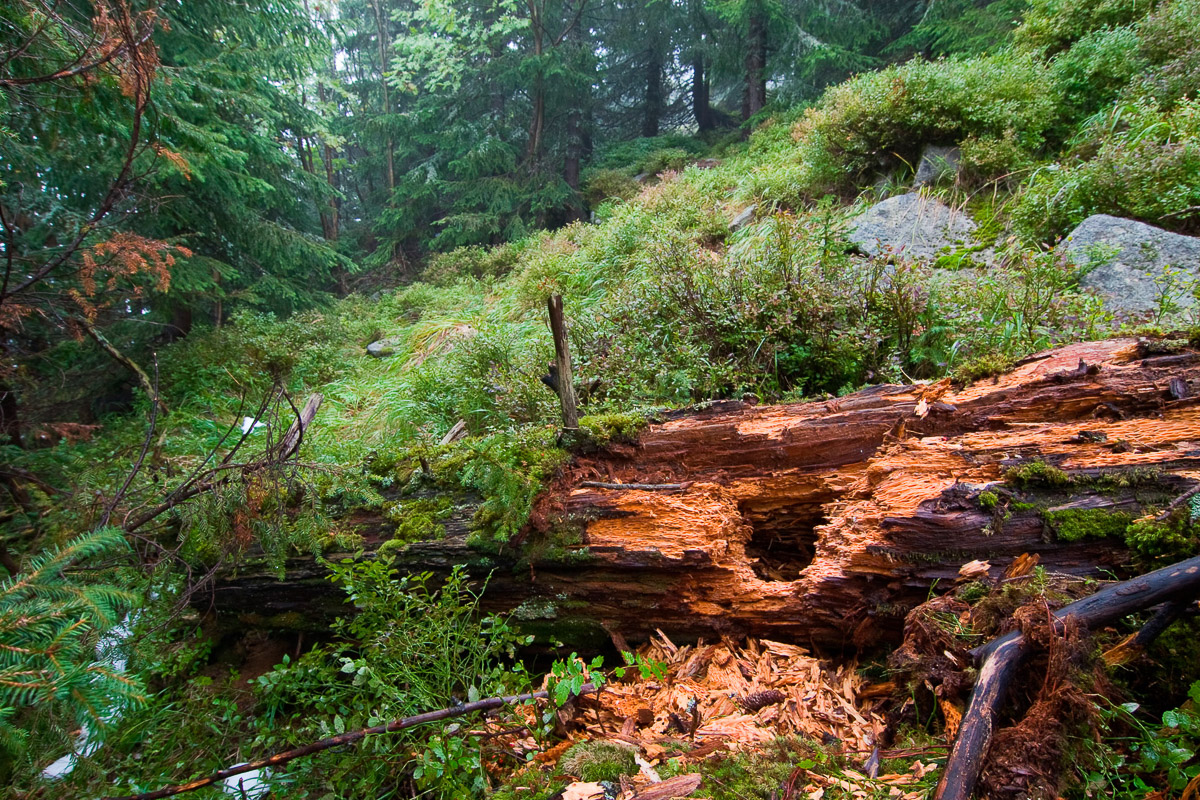 Bears mark their presence on tree trunks with scratches, bites and their own scent by rubbing the trunks intensely. These marking trees may be used by animals year after year, even over a very long period of time. But bears also bite into the tree bark to feed on the sap, eat ants in the wood and even dig out their own dens. By analysing 278 marks left by bears on the bark of silver fir trees, a study carried out in the northern Carpathian mountains in Poland showed that in more than 40% of cases, wood-eating insects had dug tunnels in the bark and in most cases it had also been drilled by woodpeckers. The most affected “wounds” were the oldest, dating from at least five years earlier. How to explain this phenomenon? As the “wounds” are exposed to the weather, micro-organisms and fungi, they decompose and become an ideal micro-environment for many species of beetles (some very rare). These lay their eggs in tiny holes in the bark and their larvae then feed on the wood, excavating tunnels. But these same larvae are also gathered by woodpeckers, which take advantage of the areas already barked by the bears. In addition, the study showed that “wounded” trees were also colonised by other animals (such as rodents and amphibians) which found a comfortable shelter and protection there.

In the Apennines, many of the relationships between bears and their environment have yet to be discovered, but based on the many studies carried out worldwide, there is no doubt that bears can also play a key role in the balance of these environments