A question of political commitment, information and greater civic engagement.

READING TIME 11 MIN
What's a bear
Where bears live
The social bear
People and bears
What's a bear
The physical makeup of a bear
The long road of bears
A bear’s diet
The omnivorous bear
The carnivorous bear
A special berry
The bear and the ant
The tree of plenty
The miracle of hibernation
Where bears live
The bears’ Apennines
A home for the bear
Beyond the bear
The social bear
Love and courtship
A cub’s life
The social map of bears
Competition, antagonism and play
People and bears
The status of bears in the Apennines
Looking for bears
Why conserve bears
Emergencies and opportunities
A bear-friendly community, a love-hate relationship
Bears and roads
Bears avoid humans when they can
The Apennine bear
The bear in the imagination
The native bear

Successful bear conservation is the sum of a complexity of factors ranging from biology to politics and from the environment to the cultural and social spheres.

A good recipe for minimising the risks faced by bears in the Apennines should include a number of indispensable ingredients: correct information, greater environmental awareness and acceptance, greater civic commitment and incisiveness on the part of politicians. This awareness can give rise to new opportunities to address and solve problems. But what do studies identify as the main potential risk factors for bears and what tools are available to address them?

Road accidents, poison, firearms and snares cause a great many deaths and call for collective responsibility

Bears die in the Apennines. At least 60 bears were killed between 1923 when the Park was established and 1970. Since the 1970s, nothing seems to have changed and an average of three bears are found dead every year. Adults and juveniles, males and females… the total amounts to at least 124 bears in the last 50 years. Between 1980 and 1985 in particular, the numbers were staggering, with peaks of between 27 and 32 dead bears in less than five years. Nonetheless, jumping ahead 40 years, 6 animals died in 2018 alone. How do the bears die? Bears die of natural causes, in other words, killed by other bears or from disease. But since the 1970s, at least 40 bears have fallen victim to poaching (snared or poisoned) or have been shot (accidentally and/or intentionally during hunts).

A massacre that went unnoticed

At 9.00 on the morning of 30 September 2007, the rhythm of the signal from the collar worn by the male known as M06 changed. Researchers know that this happens when the animal has been immobile for at least 6 hours. The bear is either dead or has lost its collar. A few hours later, Park and university staff discovered the bear’s inert and undamaged body, dashing any hope that the bear might still be alive. Over the next four days of on-site investigation, the scenario became increasingly dramatic. The search revealed the carcasses of two other bears (an adult female and a two-year-old juvenile), five wolves and at least eighteen wild boars. At the same time, Park and National Forest Service rangers identified at least eleven carcasses of goats, sheep and cows scattered across the area. The autopsy and toxicological analyses performed on a goat, the bears and the contents of an abandoned bottle left no room for doubt… the animals had been poisoned with a pesticide that at high concentrations can kill a living being in a matter of hours. All this happened a few kilometres from Pescasseroli, the heart of the Park. Who was responsible? Investigations have never provided any clue as to the possible perpetrator. What was the public’s response? A local demonstration, but nothing at national level.

In addition, 28 other bears were run over by trains or cars, drowned in water cisterns, injured by domestic dogs or victim to diseases associated with the widespread presence of unvaccinated domestic animals (clostridial disease and tuberculosis). As far as we know, humans are directly or indirectly responsible for more than 80% of the deaths documented to date. The deaths of many bears could, however, be prevented with targeted land management policies, information campaigns and increased civic engagement.

On 15 November 2018, Park staff, assisted by Carabinieri Forestali rangers, recovered 3 bears in a water collection cistern on the edge of the Park’s buffer zone. The female about 10 years of age and two yearling cubs, a male and a female, had presumably drowned when they fell into the cistern and were unable to climb out. Two other bears had already died in that same cistern in 2010, but since then there had been no follow-up to the measures taken at the time to make it safe for both humans and animals. The alarm about the risk of the eater cistern was raised by an NGO and a hiker, but only after 8 years. This all happened in an area outside the Park, crossed by everyone, but in reality by no one. The situation had been plain for all to see, but had slipped out of sight, lost among the bureaucratic delays of the public administrations, lack of institutional coordination and extreme administrative fragmentation of the territory, not to mention the lack of interest from many citizens. 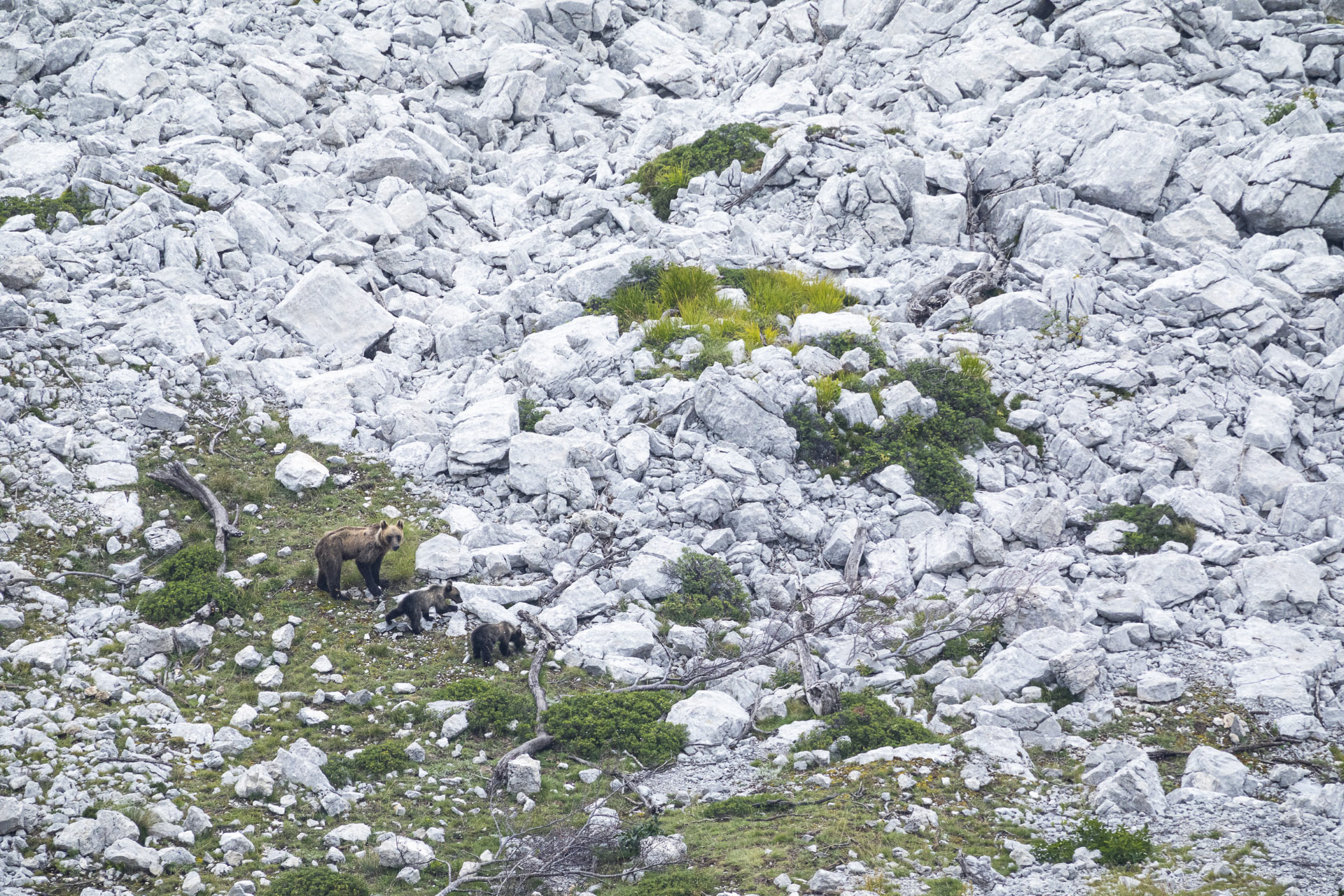 Apples, pears, sheep, chickens and bees attract bears and although the economic damage can be mitigated, they can cause conflict.

Bears’ adaptability and intelligence in light of necessity means they quickly learn to exploit new food resources, especially when it comes to high-calorie man-made foods. In the PNALM, bear damage to livestock, crops and beehives has been documented since the late 1960s. For example, from 2005 to 2015, an average of 190 claims per year were made for damage to livestock within the boundaries of the buffer zone, involving goats, cows and horses, farmyard animals and beehives, together with about 50 claims per year for damage to crops, mainly fruit trees, equivalent to compensation amounting to about €76,000. Most events occur in summer and autumn and the most affected categories are usually sheep and calves, although in terms of costs, hives alone account for 20% of the compensation. On average, only 6% of livestock farms and 20% of beekeepers in the area suffer damage each year (a total of between 6 and 49 per year). Of these, around 4 suffer chronic damage and alone account for 24% of the compensation paid. 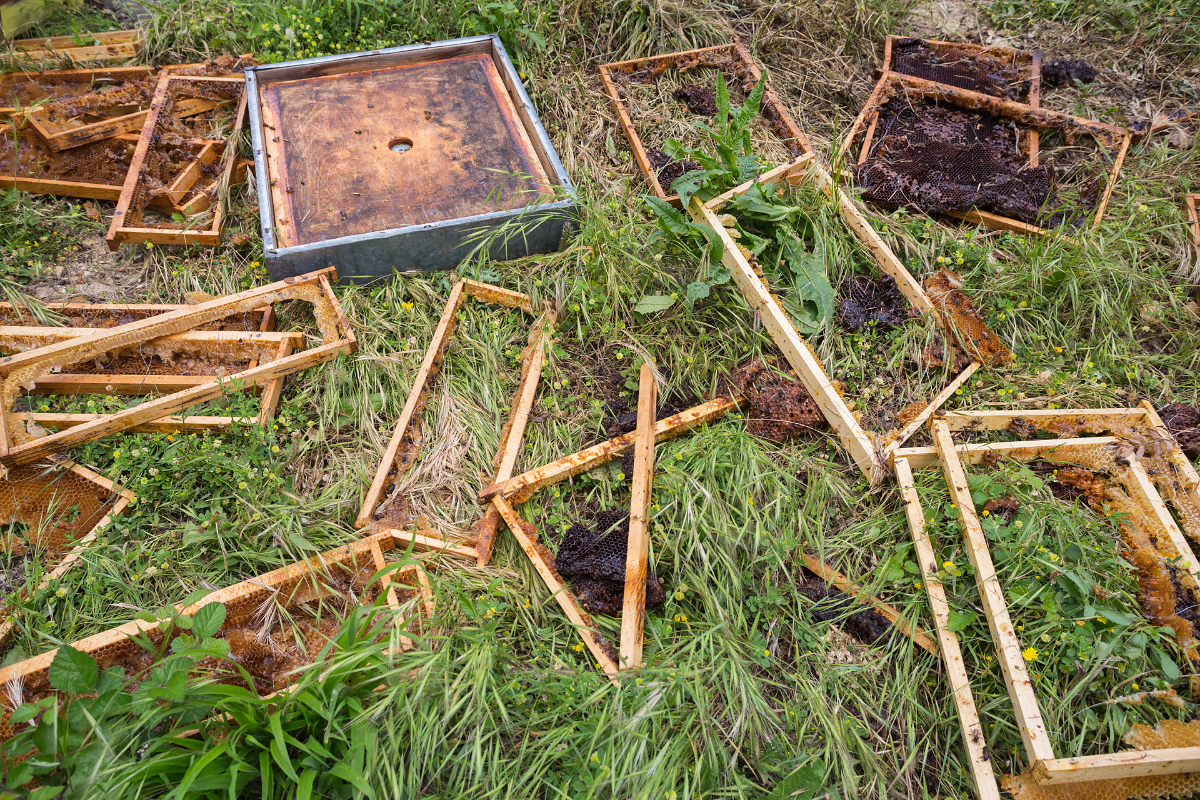 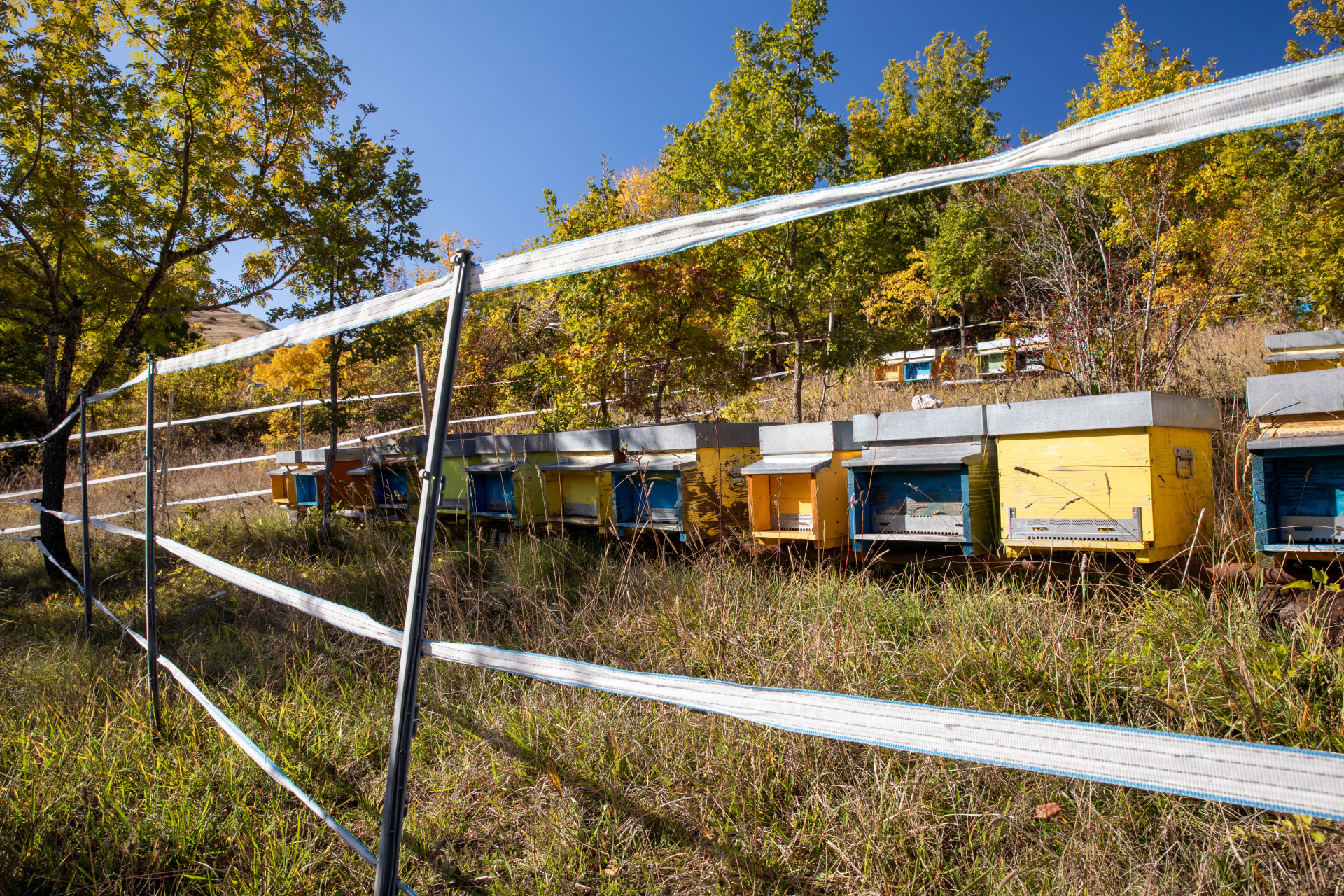 Tools exist to mitigate this damage. Several studies and the direct experience of many farmers confirm that although adoption of protective measures (electric fences, bear-proof poultry houses, guard dogs and surveillance by shepherds) requires an investment of energy and money, it does help keep losses within the limits of business risk. However, without control, maintenance and the adoption of good practices (such as the removal of food attractants or housing animals indoors during the night), the effectiveness of these systems is reduced to a minimum. On the other hand, regional authorities, protected areas and a number of non-governmental associations now offer not only programmes of reimbursement and/or economic compensation, but also other forms of economic incentives for prevention measures. In recent years, however, the recurring presence of bears conditioned by food (chickens, rabbits and unprotected fruit trees) in populated areas is generating many social and management controversies. While tools exist to mitigate economic damage, conflict mitigation requires close cooperation, trust and mutual support between the management bodies and stakeholders (livestock farmers, smallholders and inhabitants in general), according to a North American community model that is also spreading to European contexts. Is it possible to create a bear-proof community?

The dramatic increase in the number of visitors to protected areas offers many opportunities, but if not correctly managed, it also has undesirable effects.

In recent years, the ecotourism sector has expanded rapidly. The most attractive and popular forms of tourism include animal-watching and recreational and sporting activities in nature. In Italy, protected areas attract more than 100 million visitors. The management bodies face a real challenge to reduce possible undesirable effects on animals, while retaining the opportunity to enhance the economic return to local communities and especially the potential to use these numbers to raise public awareness of environmental issues. There are many tools available (information campaigns, enforcement of existing regulations, adoption of rules for access and use of the territory), but they require cooperation and awareness from users of the territory. In recent years, one critical issue to have emerged at both local and international level involves the stalking of bears (and other animals) by enthusiasts and emulators of all kinds and professions, who flock to villages, roads or sensitive areas to spot or photograph the animals. In the long term, the effects of this behaviour could compromise the bears’ welfare. But why are bears so sensitive and what are the consequences of getting too close to a bear? 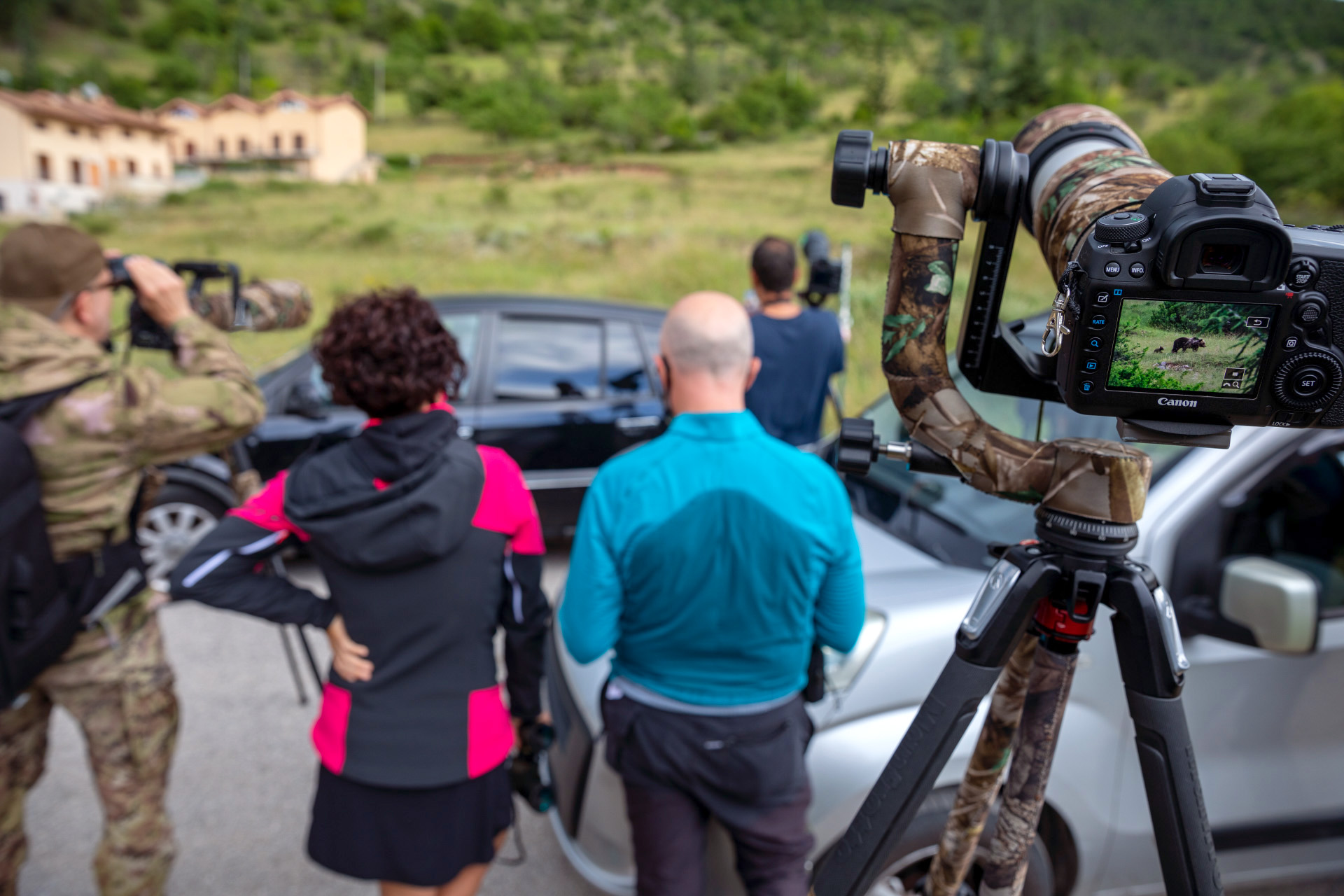 The presence of bears near villages in the Apennines might attract enthusiasts, the curious and photographers.

Genetics and small numbers do not play in the bears’ favour, but its uniqueness must be preserved.

Genome research conducted to date confirms that the reduced genetic variability and high level of inbreeding of bears in the Apennines could contribute to reducing their ability to survive and reproduce. In this scenario, the situation is aggravated by the low number of bears, making the population very fragile and sensitive to any catastrophic event. To borrow a picture from our everyday reality, we can safely say that the entire bear population in the PNALM could fit into a single school bus. One wrong turn and the bear could disappear altogether. Couldn’t we implement a genetic rescue operation, perhaps using bears from other European populations? Although it cannot be excluded in the long term, many researchers agree that the genetic, morphological and behavioural uniqueness of bears in the Apennines could be completely compromised by such actions. To date, population growth and expansion are the only conditions that can realistically contribute to reducing the bears’ loss of genetic variability. Researchers, in fact, agree that measures to reduce mortality and increase the degree of acceptance of the bear in its future areas of expansion should definitely be at the top of the list of priority actions needed to ensure the animal’s future.

Zoologists Paolo Ciucci and Anna Loy tell us the genetic uniqueness of the Apennine brown bear.

Climate change could either endanger or benefit bears in the future and could also contribute to increased conflicts.

What are the effects of climate change on bears and their ability to adapt? These questions are being investigated by scientists, but still await many answers. Spring and summer minimum temperatures have already risen by a couple of degrees during the last century. In the next century, temperatures will rise further, causing droughts and significant changes in plant communities, including many of the bears’ favourite food resources. The directions of these changes may vary (some foods will increase and others will decrease) and they could also contribute to increased conflicts with human activities. In light of this, preserving and restoring natural food sources for bears and other animals through forestry management measures should become a priority. It is also important to maintain large safe areas with diversified biodiversity to help the animals adapt as best as possible to future environmental conditions.

American bear expert David Mattson tells us how climate changes could affect the life of the bears.

Bear conservation is linked to our behaviour, values and decisions. The greater the respect and tolerance, the less vulnerable the population will be to climate change and man and the greater the likelihood that bears will be able to move about successfully in the Apennines.