Bears are introverted animals, but they spend their lives trying not to feel lonely

READING TIME 11 MIN
What's a bear
Where bears live
The social bear
People and bears
What's a bear
The physical makeup of a bear
The long road of bears
A bear’s diet
The omnivorous bear
The carnivorous bear
A special berry
The bear and the ant
The tree of plenty
The miracle of hibernation
Where bears live
The bears’ Apennines
A home for the bear
Beyond the bear
The social bear
Love and courtship
A cub’s life
The social map of bears
Competition, antagonism and play
People and bears
The status of bears in the Apennines
Looking for bears
Why conserve bears
Emergencies and opportunities
A bear-friendly community, a love-hate relationship
Bears and roads
Bears avoid humans when they can
The Apennine bear
The bear in the imagination
The native bear

The main mission of all living beings is to pass their genes on to the next generation and bears have amazing strategies to achieve this.

After months spent in the den, with the arrival of spring, the bears come out of their long torpor and prepare for their annual love ritual. Monogamy is unknown among these animals. Between April and July, males and females take part in a passionate game of partner swapping, at times with violent overtones and sometimes even with a tragic ending. It’s an exhausting few weeks for an adult male. First he must defend each conquered female from her other suitors, then he must convince her to mate. But for female bears, the most important task is to choose the best father for their offspring and to do this, they use very subtle tactics. Breeding is a really complex issue for bears, and the quality of their reproductive life is influenced not only by other individuals, but also by the environment they live in.

Effusions between two bears in early spring. The breeding season for these animals is quite long and can start as early as April.

If she’s lucky, a female bear will manage to carry no more than three or four pregnancies to term during her lifetime, each usually with two or three cubs. Sheltered inside a den, protected from predators and cold winter winds, a female bear gives birth to cubs weighing just over 500 grams. More than eight months pass from fertilisation to birth. However, after mating, the development of the embryo actually pauses, then if all goes well, resumes when the mother falls asleep and is then completed in just a couple of months.

Not all females are able to breed or successfully carry a pregnancy to term and the mortality rate of the cubs is high. Only half the young survive the first year of life.

In the Abruzzo, Lazio and Molise National Park with a population of about fifty individuals, an average of no more than three or four females give birth each year. For the new-born cubs, life is never easy. Competition between siblings begins from the first feeds and even before they turn two years old, the cubs are left alone by their mother. Cubs born to healthy mothers are certainly more likely to survive, but the quality of a young bear’s life is influenced by its resourcefulness and ability to adapt to living in a world of danger and changing seasons. 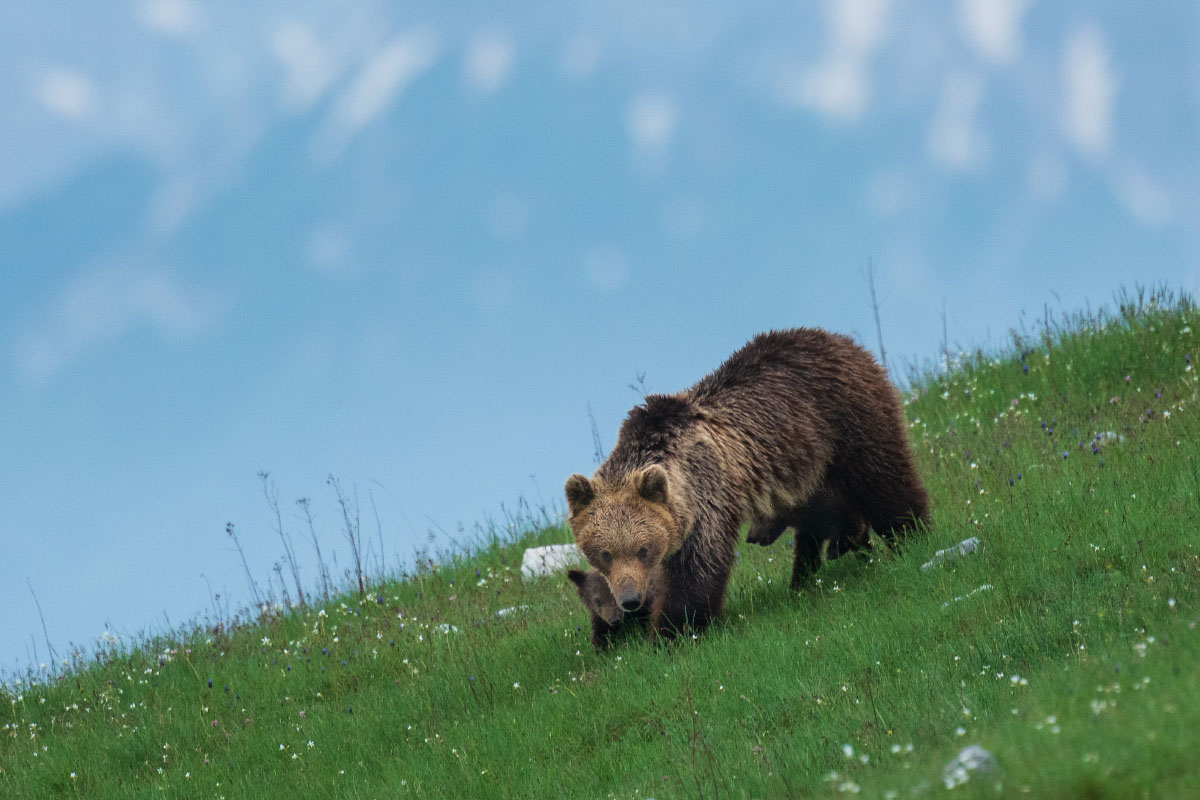 A female bear with her two cubs crosses a mountain ridge in spring. In the first months of life, the young are very vulnerable and the mother never loses sight of them.

Bears are considered solitary animals by definition, but that doesn’t mean they are “antisocial”.

With the exception of a female bear with her offspring or adults during the mating season, it is rare to see a number of bears together. But on the mountain scree covered by alpine buckthorn bushes laden with nourishing berries between the end of July and early August, bears pass from solitude to genuine gregarious gatherings. These concentrations are certainly not comparable to those occurring along the famous Alaskan rivers during the salmon runs. But sometimes some dozen or so bears (in other words, about a fifth of the entire population) may find themselves feeding on the same scree. Under these circumstances, bears show a great capacity for socialising, or rather, for controlling the tensions that could arise from this forced sociability. As we’ll see, all this is actually the result of a long process of mutual familiarity which begins for the youngest as early as spring and many years ago for the adults. Bears are, in fact, able to recognise each other individually and establish hierarchies. 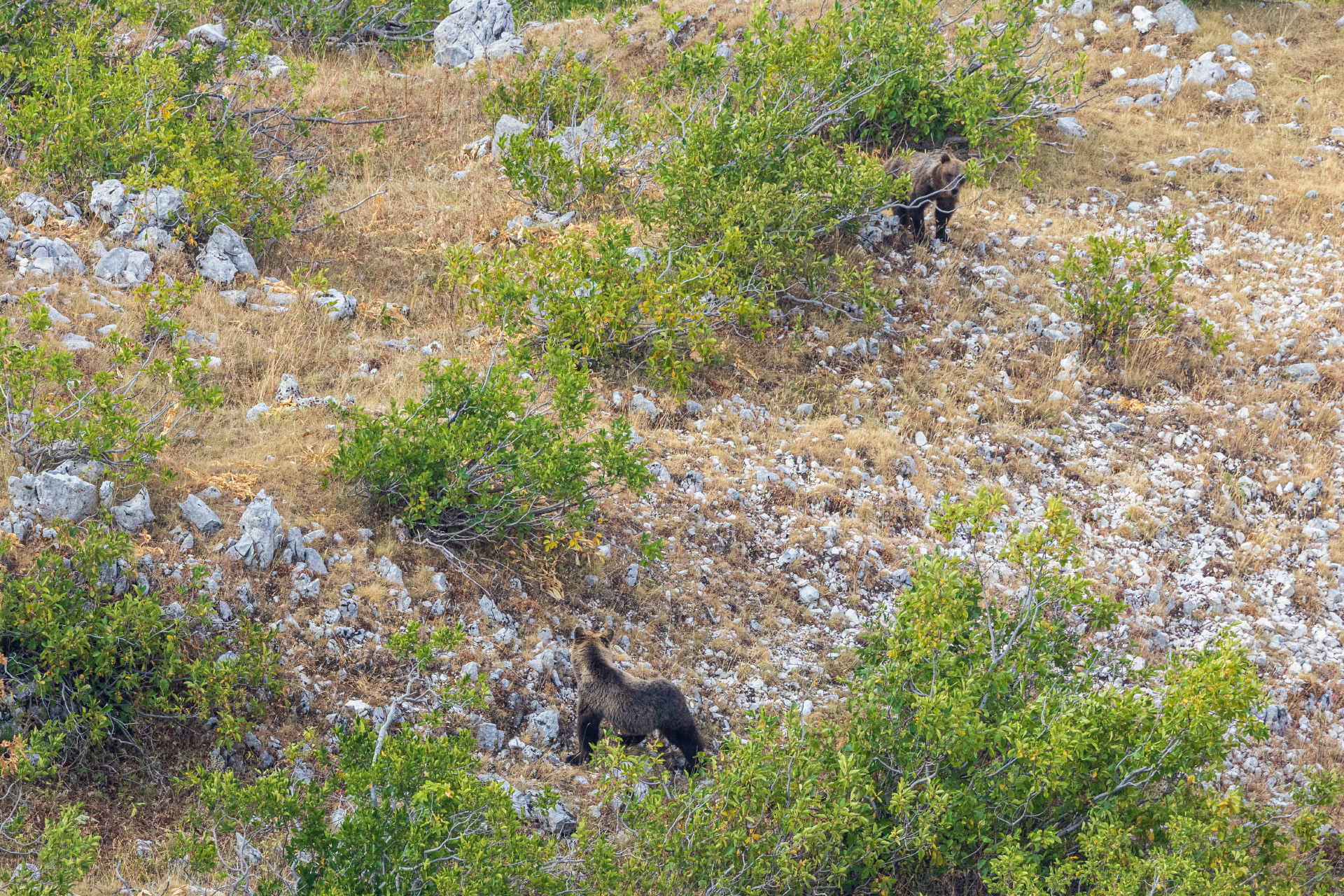 Encounter between two adult bears who study each other to share the alpine buckthorn bushes. As the berries of this plant ripen in summer, numerous individuals may feed simultaneously in certain areas.

From an early age, play helps bears get to know each other and test their physical abilities, but it continues among adults as well.

Two bear cubs just a few months old chase each other playfully on the branches of a hornbeam tree.

When a bear comes face to face with another bear, it first tries to recognise its smell by sniffing the air. To do this it moves closer, or if the wind is right, it can also keep its distance. To express its state of mind or declare its social position, a bear uses its gaze, posture and a rich repertoire of vocalisations. The basic strategy is to avoid unnecessary risks, relating in a non-competitive way, for example by playing. That said, even bears have behavioural rules that cannot be broken. When play is not enough, confrontation is inevitable. But bears try to avoid direct contact until the last moment by using threatening or conciliatory signals.

The skill with which bears manage relationships at a distance is amazing. 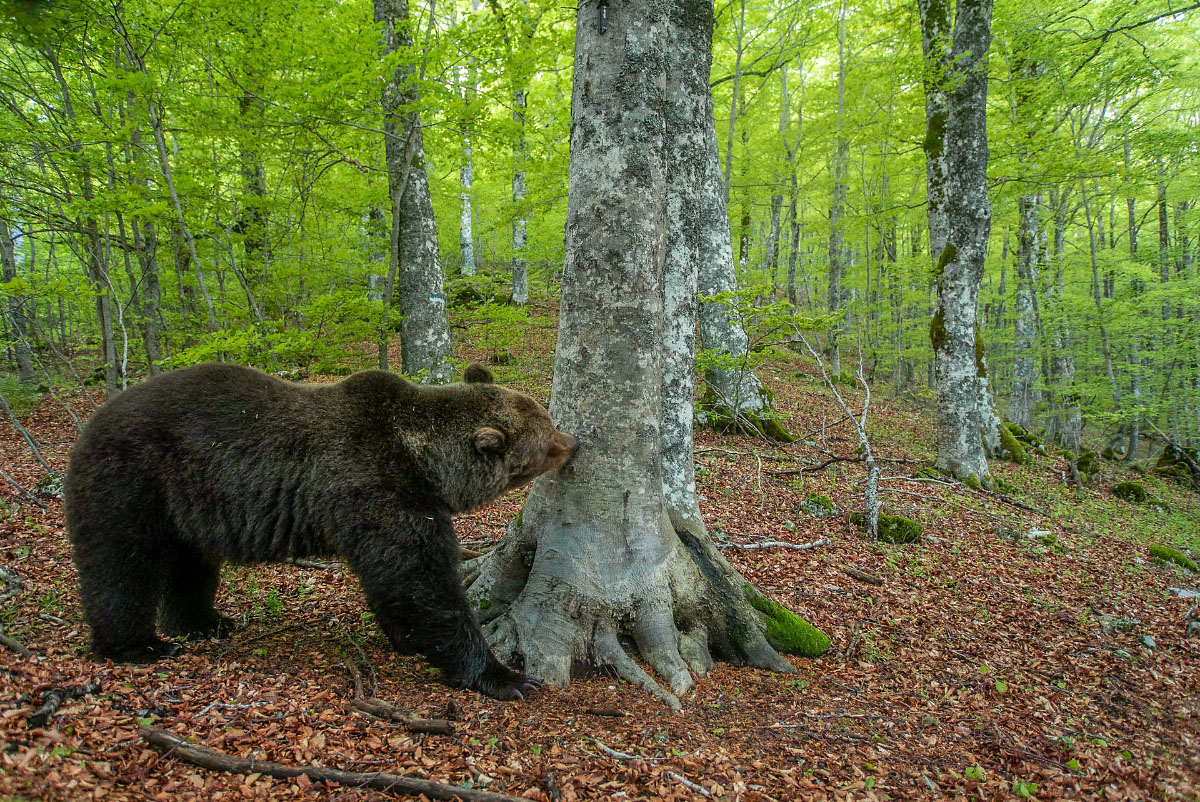 During the breeding season, a large dominant male lingers to sniff the odours left by other bears on a scratching tree.

With the exception of the summer gatherings, bears spend most of the year alone and require a lot of space to live. For example, an adult male needs an average of about 180 square kilometres of territory, an area as big as the city of Milan. So although bears tolerate the proximity of other individuals, it is certainly not easy for two animals to come into contact. But bears need both to avoid each other and to meet. For instance, males and females have to meet up during the mating season, while young bears and females with cubs try in every way they can to avoid aggressive adult males. Bears have a good sense of smell and use it to communicate with each other. They mark trees, logs on the ground and rocks by scratching themselves, or with bites and scratches. They also leave odorous and visual trails, thanks to the numerous glands present on their feet. All these form a genuine map able to let other bears know not only the identity of the author, but also the best places to find food or shelter.