A bear’s diet is an explosion of energy and nutrition

READING TIME 8 MIN
What's a bear
Where bears live
The social bear
People and bears
What's a bear
The physical makeup of a bear
The long road of bears
A bear’s diet
The omnivorous bear
The carnivorous bear
A special berry
The bear and the ant
The tree of plenty
The miracle of hibernation
Where bears live
The bears’ Apennines
A home for the bear
Beyond the bear
The social bear
Love and courtship
A cub’s life
The social map of bears
Competition, antagonism and play
People and bears
The status of bears in the Apennines
Looking for bears
Why conserve bears
Emergencies and opportunities
A bear-friendly community, a love-hate relationship
Bears and roads
Bears avoid humans when they can
The Apennine bear
The bear in the imagination
The native bear

The Marsican brown bear is essentially omnivorous, with a diet made up of various species of plant and animal.

Bears are always on the lookout for the most abundant and nutritious foods and this is why their diet is so diverse from season to season. In terms of energy, 65% of a bear’s diet consists of fruits and nuts, followed by herbaceous plants and insects (25%), domestic and wild ungulates (8%) and finally roots (2%). The diet of a bear in the Apennines is amazingly nourishing. In every season, it includes proteins, sugars and fats… an “explosive” mixture that ensures efficient digestion and rapid weight gain. All foods are not, however, the same and some play a really key role that a bear just can’t do without. But these animals are also very adaptable and if there is a shortage of a particularly important resource, they find a way to replace it.

In four years of research, we analysed about 2400 bear droppings collected in all seasons. A painstaking search for seeds, fruit skins, leaf and insect fragments, hair and bones to find out what bears eat, how often, in what volume and, most importantly, when. It took 2000 hours of work by researchers, experts and students with tweezers in hand, atlases and reference collections close by and many hours at the microscope. Each excrement is a kind of crystal ball able to reveal the secrets of an entire ecosystem. Bears feed on at least twelve species of mammal, about fifty species of insect and over twenty different species of fruit, as well as other plant species. This is the bear’s environment. This is the Apennines, a rich and diverse assortment of ecosystems where the lives of plants and animals intertwine, from those weighing just a few milligrams such as ants, to bears that can weigh over 200 kilograms.

A food for every season: the wealth of environments and species in the central Apennines gives bears access to a wide variety of natural food resources.

From the end of March to July when bears need to build up muscle mass, they feed mainly on animal and vegetable proteins.

Spring is when plants start to grow again. As the trees burst into bud, the meadows begin to turn green again, starting from the valley floor, then moving ever higher up the mountains as summer progresses. From late March to May, almost 40% of a bear’s diet is made up of herbaceous plants. Bears feed mainly on grasses, taking advantage of the more digestible and nutritious first clumps, but they also eat tree buds. From June and throughout July, bears prefer to eat the roots, leaves and flowers of other herbaceous plants, three times more nutritious than grasses. But consumption of plants during the spring is minimal following a year with a bumper crop of beechnuts, when the nuts that fell to the ground the previous autumn make up more than 30% of the bears’ diet. They continue eating these beechnuts until the end of July, although to a lesser extent. Red and roe deer and wild boar make up an important part of the bears’ diet in both spring (13%) and early summer (5%). From June, with the start of the grazing season, domestic ungulates also make an appearance in the diet (4%). Bears can nevertheless meet their animal protein and fat requirements by feeding mainly on insects (such as ants) which represent between 32% and 48% of the diet, depending on the year. From March to July, bears also get their fill of the highly digestible sugars contained in rosehips in spring and both wild and domestic cherries in early summer.

Hover on the colors to know details of bear’s diet.

Starting in the summer and continuing through the autumn, bears seek out foods that will allow them to build up fat reserves to consume during hibernation.

As the summer progresses, the bears’ appetite increases, as does their weight. From August onwards, they in fact enter the period of so-called “hyperphagia”, peaking in autumn, when bears require three times as much energy as in the spring. From the end of September, brown bears can consume up to 20,000 kilocalories, even putting on more than a kilo per day. But during this period, putting on weight means above all accumulating fat reserves, and bears achieve this by feeding on sugar-rich fruits easily converted into adipose reserves. Between August and September, a bear’s diet is essentially frugivorous, with fruit contributing more than 70% of their energy intake. They consume around twenty different species of berries and larger fruits, but the key resource is the alpine buckthorn, a berry just a few millimetres in size that ripens on high-altitude scree and can contribute from 30% to 70% of the diet, depending on the year. Although very high in proteins and lipids, nuts contribute little during the summer, except in years of abundant beechnuts, when their consumption quadruples. Bears also feed on insects, herbaceous plants, livestock, wild ungulates and roots. Each of these resources contributes from 2% to 8%. As early as July, the insects they feed on include bees, bumblebees and the larvae of flies and other insects, the latter probably associated with the consumption of carcasses. 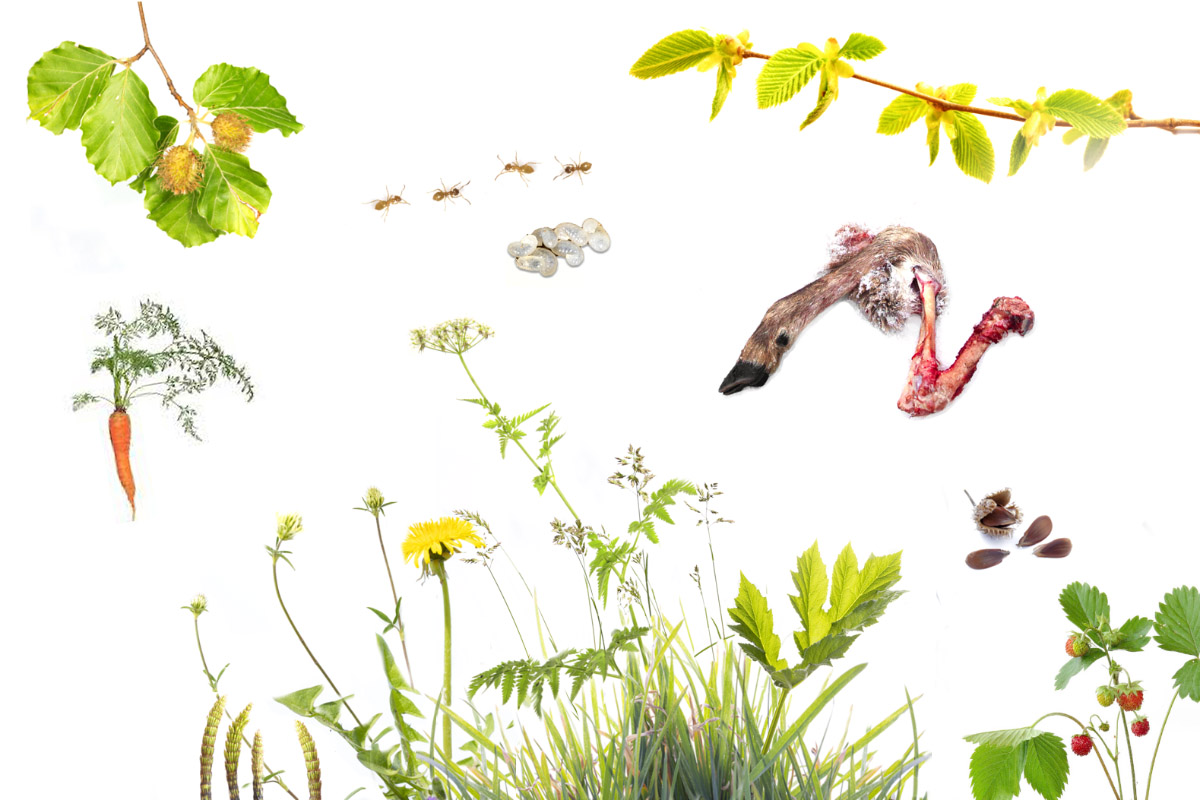 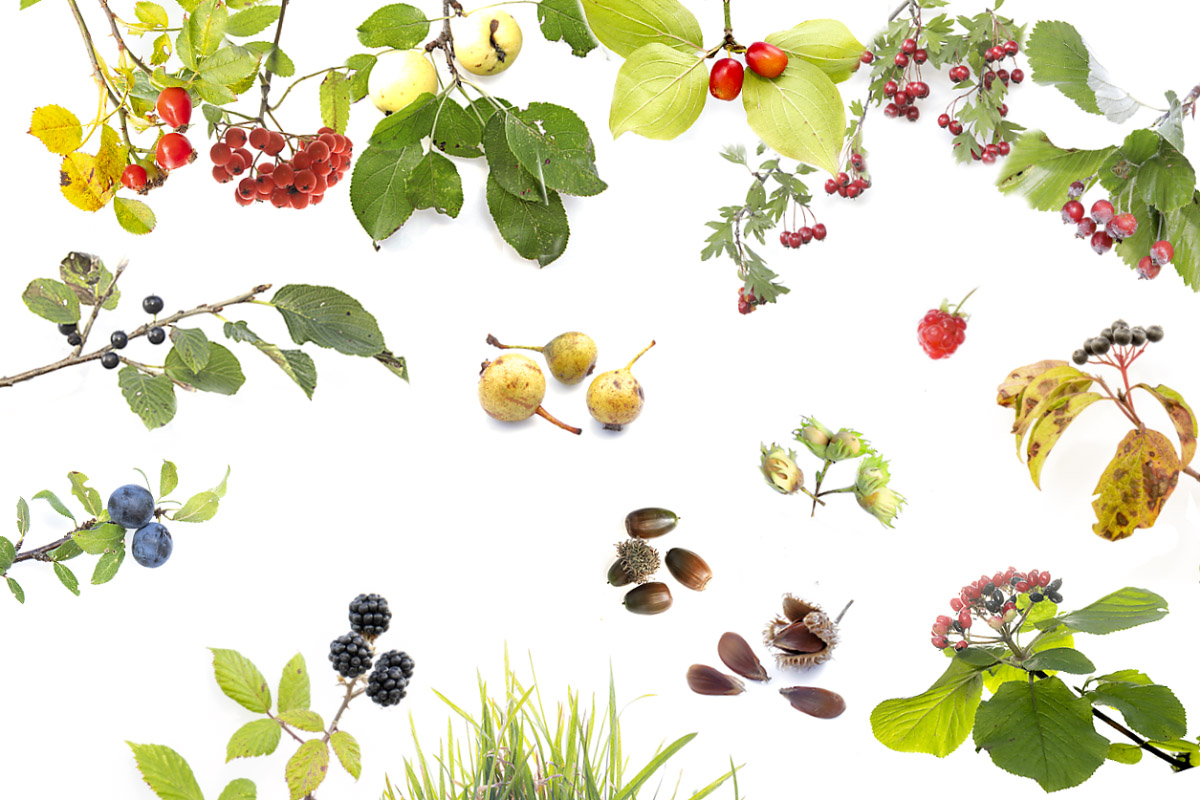 The collage of images provides an overview of some of the most common foods in the diet of the Apennine brown bear during hypophagia (left) and hyperphagia (right).

But it is in autumn that the diet of a bear gets really “fatty”. During this season, as well as eating fruit, especially apples and pears, bears also consume nuts, rich not only in sugars, but also in oils and proteins. Nut consumption peaks during this season and can account for from 49% to over 90% of the diet. The predominant nuts in a bear’s autumn diet are acorns (the fruits of turkey, downy and other species of oak) and beechnuts. Acorns are produced in roughly the same quantity year after year, but every 2 to 5 years or so, there is a bumper crop of beechnuts. Years with massive beechnut production, well above the long-term average, are known in Italian as “pasciona”. In these years, bears feed almost exclusively on beechnuts. In all other years, bears compensate for the scarcity of beechnuts by feeding on at least fifteen other species of berry and fruit, in addition to pears, apples and acorns. The rest of their diet consists of herbaceous plants, coinciding with the second phase of vegetative growth at higher altitudes, deer and insects. Autumn coincides with the deer’s breeding season and males in particular, undernourished and weakened by their “amorous” battles, become easy prey for wolves and bears.

Hover on the colors to know details of bear’s diet.

Data on bears’ diets would seem to confirm the richness of Apennine ecosystems. There has never been evidence of nutritional stress among the bears captured and monitored during the years of study, indicating that years when all kinds of food resource are scarce are very rare indeed, at least within the Park. These conclusions are further reinforced by a study conducted in 2013 and 2014 in which the diet of eight bears was reconstructed using an alternative technique (analysis of the stable isotopes contained in hair samples). The study found that the diet of each bear both overlaps and differs from that of other bears, again highlighting the fact that these animals have many different types of food available. Since the birth and survival of the cubs is closely linked to the health of their mother, and since average birth rates have remained high over the past 15 years, it can also be assumed that the bears have always found enough food to eat.

In the film made with video traps, a bear at the peak of its autumn hyperphagia feeds on wild pear fruits fallen to the ground in a hillside forest.

According to research, bears in the Park appear to have a very “wild” diet and eat mainly natural foods, in other words, no notable dependence on human-derived foods has been documented. Bears may, however, sometimes eat domestic animals and fruit from cultivated plants (such as damsons, plums, cherries, apples and pears), a phenomenon favoured by the overlap between the bears’ territories and cultivated land or pastures. In the entire park area, including the external protection zone, there are generally just a few dozen cases per year of damage to crops (mainly involving pear, apple and cherry trees), while damage to livestock is no more than double this, most commonly involving livestock, farmyard animals and beehives. 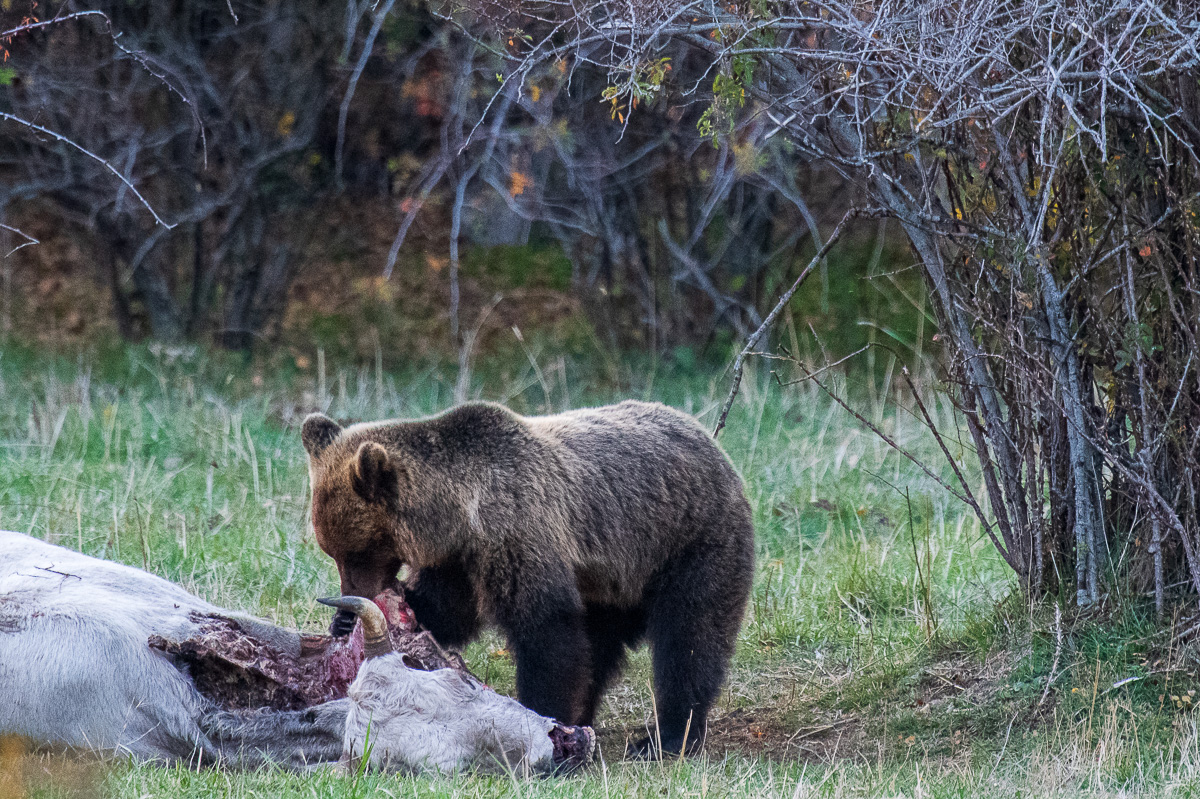 A bear feeds on the remains of a cow that died of natural causes. The presence of domestic animal carcasses in the area occupied by the Apennine bear is controversial. While it is an important resource for the bears, it can also give rise to conflict and health and management issues.

Some bears may, however, become bolder and even go in search of food in populated areas. Studies demonstrate that this phenomenon may be caused by a multitude of often interacting factors (age, sex, the animal’s temperament, social hierarchy, the seasonal and annual fluctuation of natural food sources and the availability and accessibility of human-derived food sources). For a bear that needs to gain tens of kilograms in a few months, any food of human origin is equivalent to “fast food”… nutritious, appetising, plentiful and easy to acquire. Under these conditions and especially in a protected area where they feel safe, some bears give in to temptation and may get used to frequenting built-up areas where there is little competition with other bears. This phenomenon could also be triggered by human carelessness. Research has shown widespread consumption of roots, which are nothing but the carrots left in vast quantities for cows and horses out to pasture. As well as creating dependency (tons of carrots are available throughout the summer), this resource has also been associated with the onset of confident (loss of mistrust of humans and frequentation of populated areas) and problematic (chronic damage to human activities) behaviour. 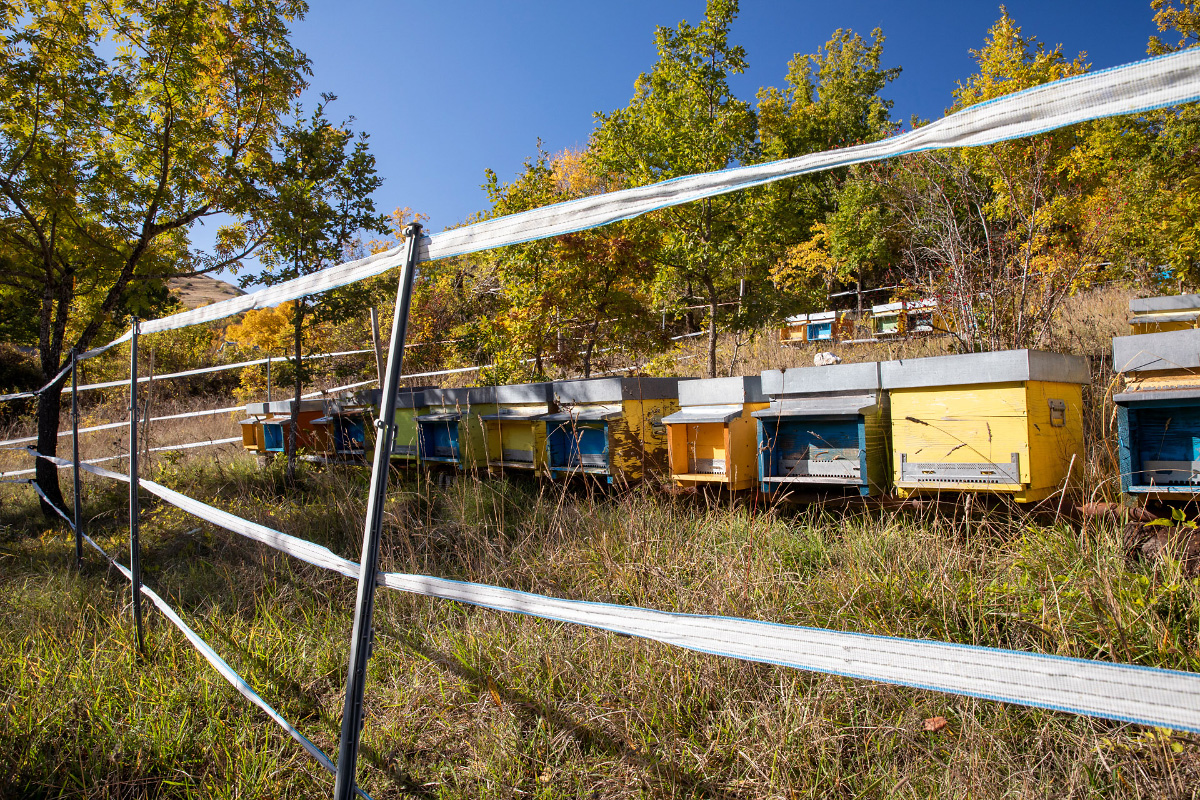 Beehives protected by electric fencing. Preventing or limiting bears’ access to human-derived food resources is the best way to prevent conflict with the species.

As can be expected, the resources bears feed on naturally fluctuate from year to year and this will be ever more the case in the light of current and future climate change. Prudent and proactive “bear-proof” management should aim to maintain abundant and mature populations of beech and oak trees, in order to preserve the long-term availability of all the other key resources. All this, in parallel with the adoption of a series of good practices aimed at reducing the sources of attraction for bears in populated areas and their dependence on human-derived resources, the origin of conflicts more social than economic.

The Apennines are rich in natural food resources, more than enough for the present bear population. A wealth to be protected to preserve the ecosystems of which bears are an integral part and their equilibrium, and lastly, to avoid conflict with our species.