The long road of bears

READING TIME 12 MIN
What's a bear
Where bears live
The social bear
People and bears
What's a bear
The physical makeup of a bear
The long road of bears
A bear’s diet
The omnivorous bear
The carnivorous bear
A special berry
The bear and the ant
The tree of plenty
The miracle of hibernation
Where bears live
The bears’ Apennines
A home for the bear
Beyond the bear
The social bear
Love and courtship
A cub’s life
The social map of bears
Competition, antagonism and play
People and bears
The status of bears in the Apennines
Looking for bears
Why conserve bears
Emergencies and opportunities
A bear-friendly community, a love-hate relationship
Bears and roads
Bears avoid humans when they can
The Apennine bear
The bear in the imagination
The native bear

The highly complex evolutionary history of bears is not always easy to “decipher” considering the frequent cross-breeding that occurred between the ancestors of today’s animals.

The phylogenesis of bears has been traced through palaeontology (the study of fossil remains) and genetics (the study of mitochondrial DNA and genetic makeup or genome). The bears alive today have relatively recent progenitors, but to reconstruct their history we have to go back several millions of years, to the subfamily Hemicyoninae and genus Cephalogale in particular. This group appeared for the first time in Eurasia during the mid-Oligocene, about 30 million years ago, from a branch that split off from the line that originated today’s canids. The first representatives of this genus were mostly very tiny, smaller than a fox, although some species could reach almost the size of modern bears. The first bears are thought to have derived from this genus during the Miocene, namely about 20 million years ago. These animals belonging to the Ursavus genus spread progressively through the Asian continent, North America and Europe, originating all today’s bears and their countless predecessors. The first line to break away was the Ailuropodidae subfamily (about 15 million years ago), that of today’s giant panda (Ailuropoda melanoleuca). Subsequently, between six to thirteen million years ago, a second split occurred, originating two other subfamilies: the Tremarctinae and the Ursinae. The former originated several species of bear that proliferated in North America, but the only one still surviving today is the spectacled bear (Tremarctos ornatus), widespread in South America.

BEFORE THE ICE AGE

Numerous bears belonging to the Tremarctinae family thrived in North America, then became extinct. Among the best known is the short-faced bear (Arctodus simus), a giant weighing at least 650 kg with limbs up to two metres long. Arctodus simus was much faster than modern brown bears and could easily reach 90 km per hour.  Reconstructions of the shape of the teeth (the carnassials are still present) and structure of the skull have shown it to be one of the few completely carnivorous bears (in common with the polar bear) and it is believed to have been one of the most powerful predators of bison, deer, horses and sloths during the Pleistocene. (© Roman Uchytel – Prehistoric Fauna) 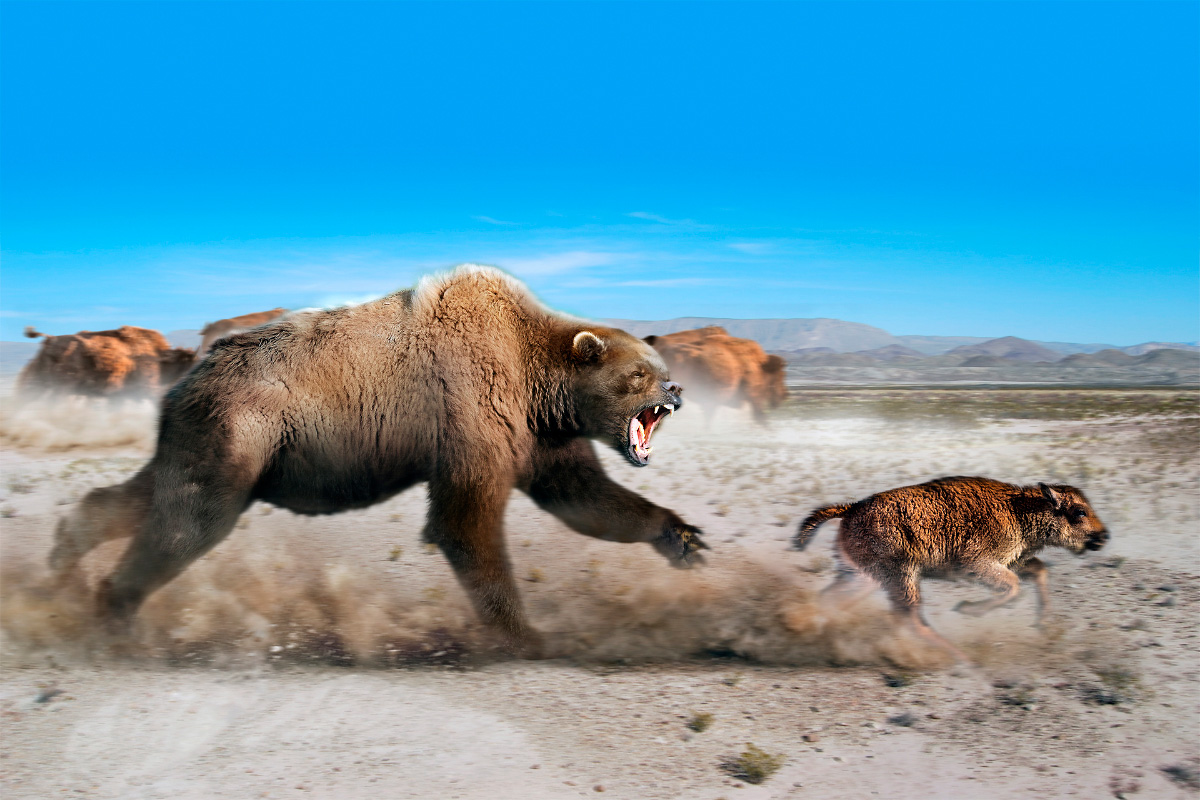 As for the Ursinae subfamily, starting from Ursus minimus, a common progenitor that appeared about 4-5 million years ago, a first branch split off to originate three species of bear living in the Asian continent today: the Asian black bear (Ursus thibetanus), the sloth bear (Ursus ursinus) and the sun bear (Ursus malayanus). About 3.5 million years ago, a second line then split off in Asia and North America, originating the American black bear (Ursus americanus). About one to two million years ago, two branches then split off from a common progenitor known as Ursus etruscus: the  “dead” branch of cave bears including the well-known Ursus spelaeus and the branch that originated the polar bear (Ursus maritimus) and brown bear (Ursus arctos). The oldest brown bear fossil dating back to about half a million years ago was found in China, from where it then spread to Asia, Europe and North Africa. Brown bear fossils have also been found in Britain. Brown bears made their appearance in Alaska about 100,000 years ago, then spread further south no earlier than 13,000 years ago. Since their separation from the polar bear, brown bears have diversified into at least six groups, or clades, many of which have survived to the present day, thanks to their isolation in refuge areas formed during the Ice Age.

Phylogenesis of the Ursidae family and diversification of brown bears into clades (groups deriving from common ancestors) based on mitochondrial DNA analyses in Europe, Asia and North America. The arrows show the “genetic” exchanges between different species of bear still underway today. The clades originated as a result of isolation during the Ice Age. Research is ongoing and many updates are expected, especially regarding clades 5 and 6. A recent study found that Iranian bears form a separate group.

The bear is the only large carnivore with a predominantly vegetarian diet.

During their evolution, bears became specialised for a diet of herbaceous plants and fruits. Exceptions with a strictly carnivorous diet are the polar bear and a number of extinct species. In bears, the evolution from carnivore to omnivore with a particular predilection for plant food involved elongation of the molars and the transition from transverse to sagittal mastication, giving them greater strength and the ability to shred. The first evidence of an omnivorous diet in the evolutionary line of bears dates back to the Miocene (about 15-12.5 million years ago), with the discovery in North America of bone remains of Aurorarctos tirawa, one of the  “original” bears and a contemporary of Ursavus. 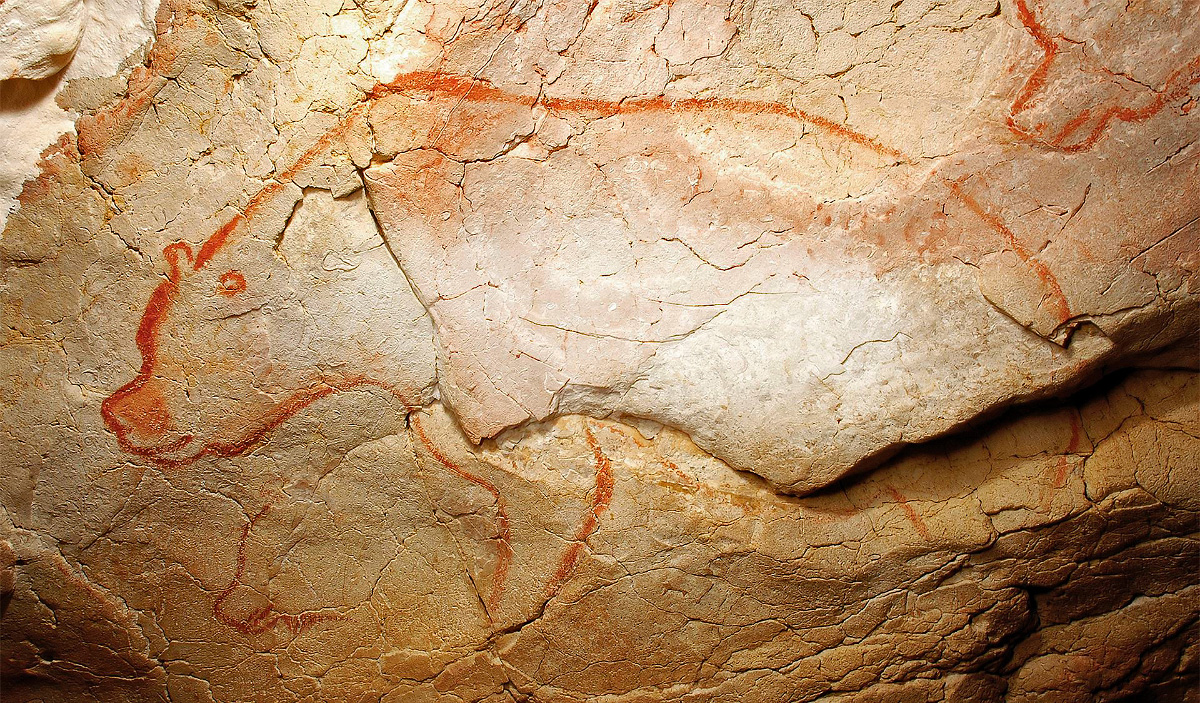 Found almost exclusively in Europe, Ursus spelaeus was one of the largest Ice Age carnivores (3 m high and weighing up to 1000 kg) and also the most vegetarian, as determined by examination of the fossil teeth (reduction of the carnassials and premolars, development of a diastema and molars with larger grinding surface) and analysis of the diet with isotopic techniques based on bone remains. These also confirm that the bear practised hibernation. No valid explanation for the possible causes of extinction has yet been found. Some authors believe it may be associated with the climate changes at the end of the Pleistocene (colder, drier climate), also thought to have led to the disappearance of other large mammals such as the giant deer or cave lion. Others believe that colonisation of their “large” winter caves may have condemned them to long winters without food.

In carnivorous mammals, such as canids, the larger the species, the greater the consumption of meat. Some experts believe the anatomical transition in mastication coincided with the bears’ particular ability to hibernate. This characteristic adaptation allows bears to overcome the ecological limits imposed by their large body size, namely, the need to ingest a considerable quantity of food, enabling them to cope with seasonal fluctuations in the availability of resources or the drastic climate changes that accompanied their evolution. The adaptation of hibernation seems to have appeared in the Miocene as an optional choice, depending on the latitudes where the bears lived and the presence or absence of snowy winters. The two bear species alive today that do not hibernate originated during the Pliocene in the climates of the lower-middle temperate zone of the American continent (spectacled bear) and Indian subcontinent (sloth bear), with the appearance of colder, drier climates and markedly seasonal rainfall patterns. But it was in the cold Arctic climates of the temperate zones during the Pleistocene glaciations that the pronounced seasonality made it obligatory to spend the winter in a state of dormancy, as is still the case today for most living bear species.

AT THE ORIGINS OF THE LONG SLEEP

The discovery and study of the fossil remains of a medium-sized bear, Protarctos abstrusus, in the Beaver Pond fossil site in the Arctic led to a number of hypotheses concerning the appearance of hibernation during the evolution of bears. This species lived in the Pliocene boreal forest about 3-4 million years ago, at the same time as the Ursavus genus, and left no living descendants. Its dentition was still not highly specialised for a herbivorous diet, although the presence of caries confirms the frequent consumption of sugars. Reconstructing the vegetation of the period, P. abstrusus must have consumed large quantities of crowberry (Empetrum nigrum). Its diet seems to have been aimed at accumulating fat, probably in association with a sedentary lifestyle during the winter. This may have been the first species in the history of bears to hibernate. Based on this evolutionary scenario, the modern bears that do not hibernate may have lost this ability at a later date as an adaptation to warmer climates. (© Roman Uchytel – Prehistoric Fauna) 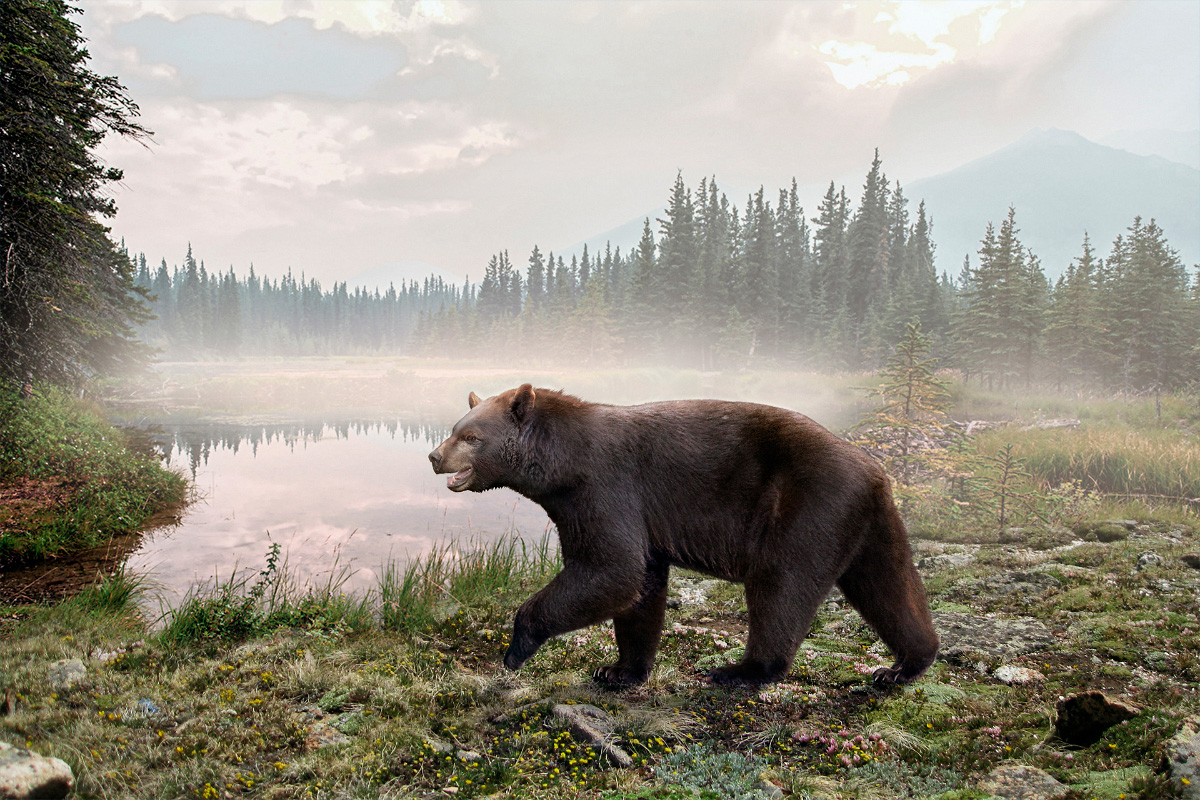 The Apennine brown bear is unique from a genetic, morphological and behavioural point of view

Zoologist Paolo Ciucci tells the extraordinary story of the Apennine bear’s genome. Through DNA mapping, researchers are discovering the weaknesses and strengths of this small population.

Analysis of mitochondrial DNA (transmitted exclusively through the maternal line) has enabled the main phylogenetic lines of brown bears in Europe to be reconstructed, allowing the bears to be classified into genetically distinct population groups. This produced a very complex tree of clades and sub-clades. To put it simply, three main lines can be distinguished in Europe: an eastern line present in Romania, Slovakia, Estonia, Finland and northern Sweden; a north-western line present in the Pyrenees, Norway and southern Sweden; a south-western line distributed over the Alps, Apennines, Balkans, Greece, Bulgaria and Romania. The first brown bear fossils found in Italy date from about 7000-5500 years ago, when bears were probably distributed continuously over the whole peninsula. Recent studies have highlighted the uniqueness of the mitochondrial DNA of Apennine bears, although an affinity with the south-western Alpine-Balkan line has been identified. This apparent contradiction is resolved by research carried out on the whole genome, showing that the Marsican brown bear population has been completely isolated from this line for more than 3000-4000 years..

The isolation, associated with a progressive reduction in numbers, would seem to have begun as early as 8000 years ago and accelerated drastically from 600 years ago until more recent times. The increase in the numbers of humans, deforestation associated with the development of farming and direct mortality at the hand of man were undoubtedly decisive factors in bringing about the decline in numbers and reduction in the distribution area of the bear population. Reproductive and genetic isolation in numerically small populations, intensified by phenomena associated with adaptation to local environmental conditions, can lead to profound genetic, but also morphological and behavioural, changes in individuals. And that is what happened to the bear in the Apennines. Apennine bears, in fact, have a completely different skull structure from other brown bears, greater physiological adaptations to a vegetarian diet and a much more peaceful disposition. Confirming the intuition of naturalist and zoologist Giuseppe Altobello in the early 1920s, the differences observed have led many experts to consider the Apennine bear as a unique subspecies, known as Ursus arctos marsicanus. 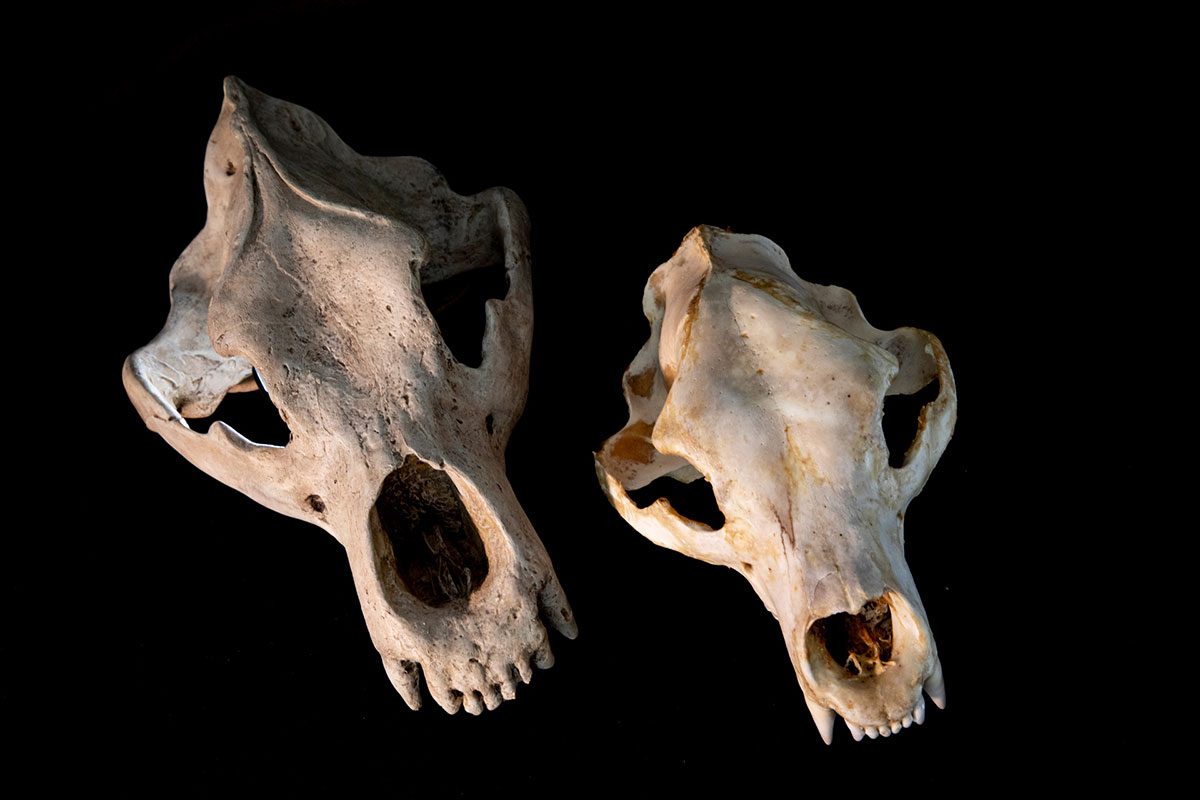 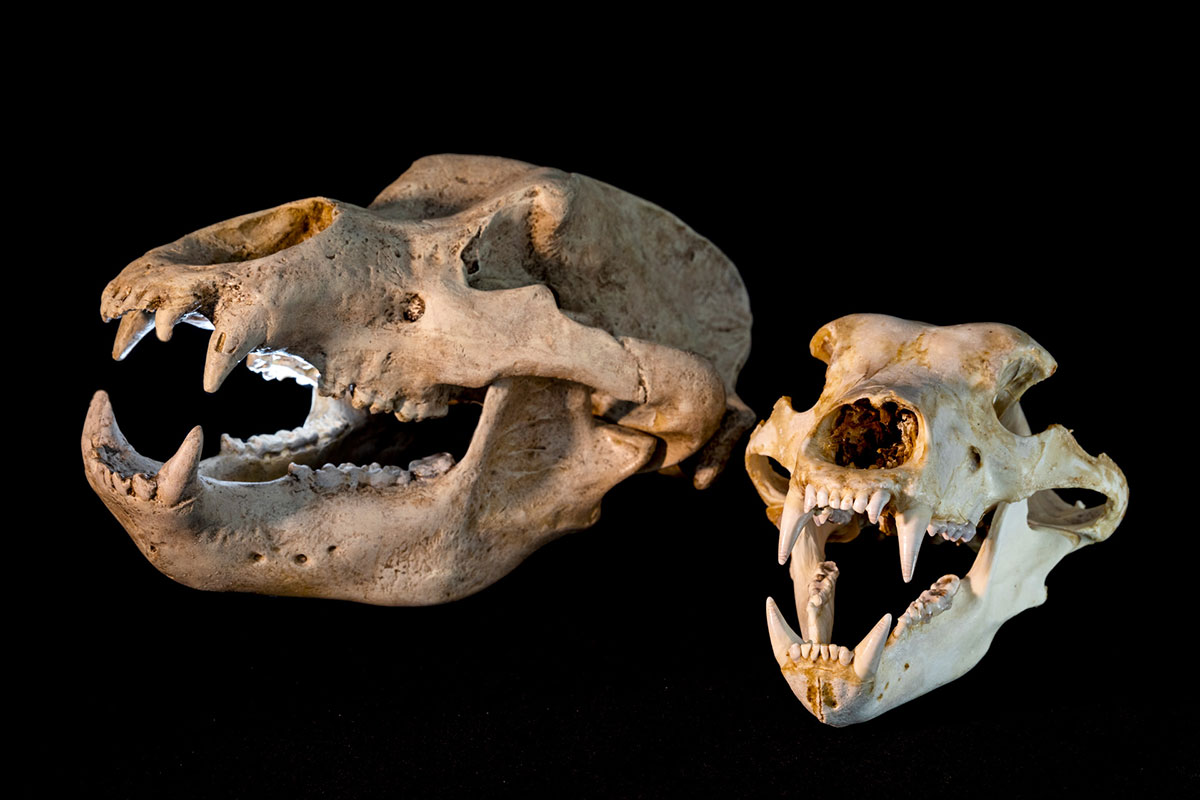 The Apennine population has low genetic diversity, high levels of inbreeding and a considerable decrease in effective population size (the number capable of breeding and thus able to produce new individuals). All this can contribute to reducing the capacity of these bears to survive, breed and adapt.

The genome history of bears in the Apennines raises many concerns about the health of this population, although it has made it unique in terms of adaptations.