Where the bears live

A journey through the bears’ mountains

READING TIME 15 MIN
What's a bear
Where bears live
The social bear
People and bears
What's a bear
The physical makeup of a bear
The long road of bears
A bear’s diet
The omnivorous bear
The carnivorous bear
A special berry
The bear and the ant
The tree of plenty
The miracle of hibernation
Where bears live
The bears’ Apennines
A home for the bear
Beyond the bear
The social bear
Love and courtship
A cub’s life
The social map of bears
Competition, antagonism and play
People and bears
The status of bears in the Apennines
Looking for bears
Why preserve bears
Emergencies and opportunities
The Apennine bear
The bear in the imagination
The native bear

The area in and around the Abruzzo, Lazio and Molise National Park has always been the stronghold of Apennine bears.

Italy’s wild heart is made up of more than 1300 square kilometres of steep mountains and deep valleys, furrowed by numerous watercourses and covered by imposing forests, home to an astonishing nature which has almost miraculously survived just a stone’s throw from great cities such as Rome and Naples. Despite its proximity to the sea, the climate here is more inclement than in typically Mediterranean zones. The summers are dry and the winters are cold and snowy. The peaks can be covered by a white blanket from mid-December until the end of March and sometimes beyond. The predominant environments are deciduous forests, followed by mountain grasslands, pastures and scrub. Along the bottom of the valleys, there are numerous villages, together with surviving areas of cultivated and uncultivated land. Below an altitude of 1300 metres, the woods are dominated by turkey and downy oaks (Quercus cerris and Q. pubescens), while at higher altitudes the beech (Fagus sylvatica) reigns supreme. The Park is also home to some of Europe’s oldest beech forests, where the trees grow, reproduce and die a  “natural death “, following natural cycles that favour the establishment and life of a great number of animal and plant species. But the woods are also rich in sycamores and maples (Acer spp.), wild fruit trees (such as Pyrus pyraster, Malus sylvestris, Prunus spp. and Sorbus spp.), together with domestic varieties of apple, pear, plum and cherry scattered throughout the cultivated and uncultivated land.

After a spring thunderstorm, the clouds part, revealing a glimpse of the forests and snow-capped peaks of a valley in the Abruzzo, Lazio and Molise National Park.

The product of millennia of human history with its ups and downs, this mosaic of environments has a very varied scrub community, including numerous fruit-bearing plants such as bramble, raspberry, viburnum and cornel, to name but a few. The mountain and sub-mountain belts are dotted with verdant mesophilous semi-natural grasslands (Festuco-Brometea), while above an altitude of 1800 metres, the extensive primary grasslands host a rich variety of herbaceous plant communities (Seslerion apenninae, Festuco-Trifolietum thalii). The deep, nitrate-rich soils near the sheepfolds and the preferential routes followed by flocks or watercourses are colonised by various herbaceous plants such as chervil, good king Henry and nettle (Chaerophyllum spp., Chenopodium spp., Rumex spp. and Urtica spp.).

The valleys, forests and rocky environments are populated by a great variety of vertebrates and invertebrates, including many species endemic or very rare elsewhere. The Park protects most of the species typical of mountain ecosystems and the Apennines in particular. Among the mammals, the community of wild ungulates is especially significant, with red deer (Cervus elaphus), roe deer (Capreolus capreolus), wild boar (Sus scrofa) and the exclusive Apennine chamois (Rupicapra pyrenaica ornata), potential prey not only for the bear, but also the wolf, present here with a high density population (5 wolves/100 km2). But the herbivores are not all wild. From early summer until early autumn, domestic animals (sheep, goats, cows and horses) are still grazed in these mountains, often at high densities and, in the case of cattle and horses, in a semi-wild state. Throughout the area, there are guard dogs associated with the livestock, as well as stray and feral dogs.

The stronghold of bears

Enter the heart of the Apennines, along the valleys shaped by people up to the highest peaks, from which the view ranges over vast forests and towards new territories.

Since the Neolithic, the landscape of the Apennines has developed hand in hand with man’s activities, in particular sheep farming, the real force shaping the territory. The traces of all this can still be seen in the abandoned cultivations and remains of old sheepfolds present in even the most remote areas, as well as in the network of paths and roads still existing almost everywhere. Today, the average population density (±SD) in the Park is  about 15 persons/km2, while the density of paved roads in the Park amounts to 39 km/100 km2. Animal husbandry, tree felling and tourism are important economic resources, while arable farming is now mainly confined to areas of the valley floor near the villages. Utilisation of the woods is carried out with the authorisation of the Park, with the exception of certain particularly delicate areas rented by the Park Authority itself to prevent deterioration of the habitat. Hunting (wild boar, hares and birds) is allowed exclusively in the buffer area around the Park between the months of October and January. 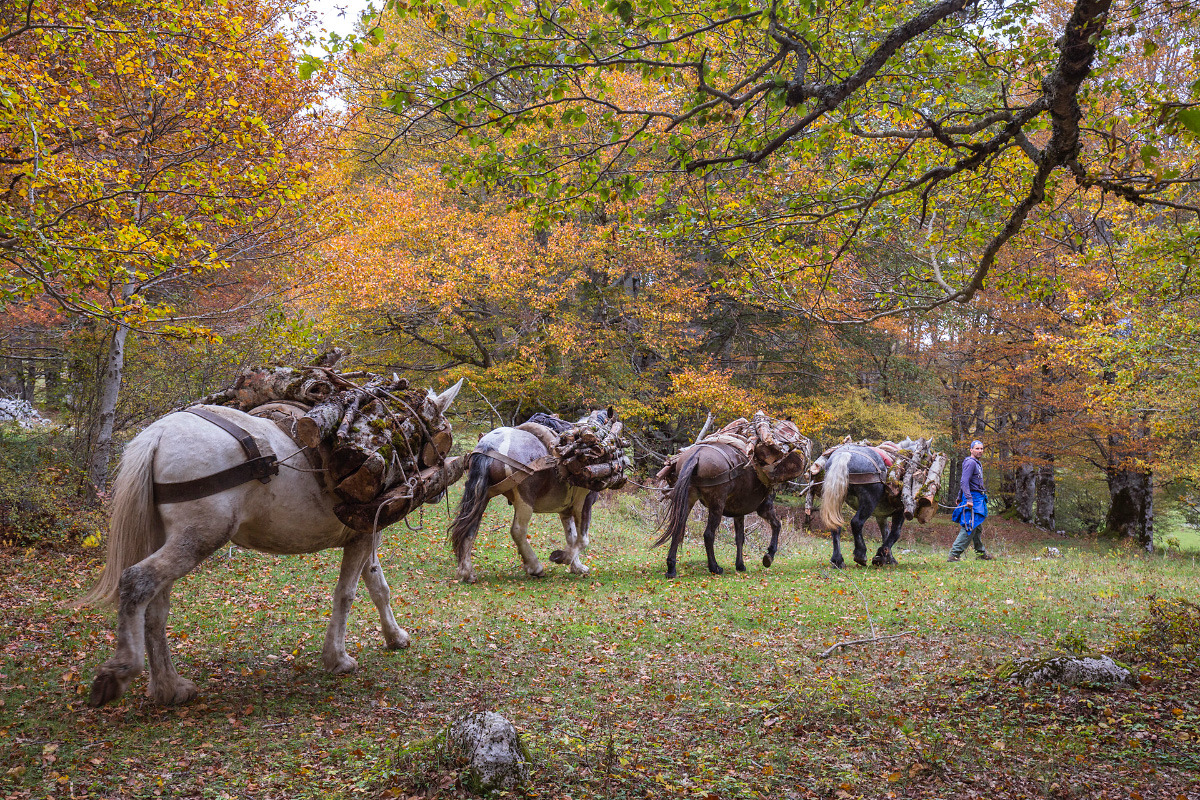 Many traditional ways of using the land are practised in the ALMNP, including tree felling, with the logs still carried out by mules and horses.

For the historical, cultural and ecological complexity of this area, the relationships linking bears, the Apennines and man can be truly countless and surprising. More than in many other regions of the planet, the life of bears in these mountains has been inextricably entwined with their surroundings for thousands of years, from a blade of grass or an ant to man and his activities. The relationship with our species in particular has always been polarised between two extreme opposites of attraction and repulsion, varying constantly down the centuries according to the culture prevailing at the time.